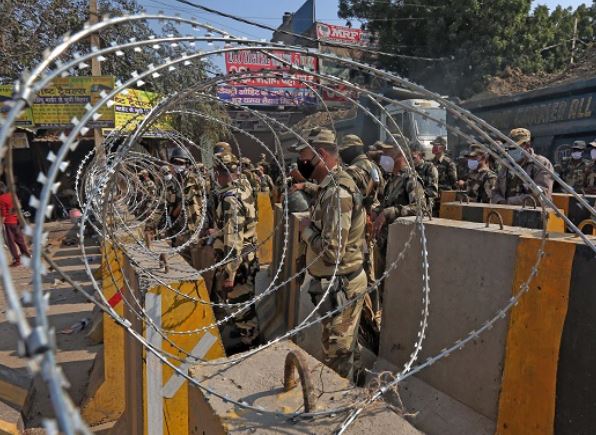 The Farmer’s Produce Trade and Commerce (Promotion and Facilitation) Bill, 2020 and the Farmers (Empowerment and Protection) Agreement of Price Assurance and Farm Services Bill, 2020 were passed by the Upper House in September through voice vote despite objection from opposition parties.

Heavy presence of security personnel was seen at Singhu border (Haryana-Delhi border) on Friday, in the wake of farmers’ ‘Delhi Chalo’ protest march. Apart from the presence of personnel, barricading laced with barbwires was placed to stop the approaching protestors.

Earlier today, farmers heading towards Delhi against the Centre’s recently passed farm laws halted near the Panipat toll plaza at the National Highway. Police used water cannons and tear gas to disperse the farmers who broke barricades in some places in Haryana. After the night halt at Panipat, the protesting farmers will resume the march the next morning.

Amandeep, a farmer, while speaking to ANI said: “The main demand is that they should listen to us. They have brought farm laws and still, they are not hearing us. If the Minimum Support Price (MSP) and Arhtiyas system (middlemen or service providers) are removed then what will the farmers do?”

While the government said the three laws will do away with middlemen, enabling farmers to sell their produce in the commercial markets, protestors fear that this could lead to the government not buying produce at guaranteed prices, thereby disrupting their timely payments.

“We have brought enough ration to sustain for five to six months in Delhi. We are conducting peaceful agitation. Gurudwaras are sending us food supplies as well,” he added.

He further said: “In Kurukshetra, police chased away the elderly farmers by beating them. Will we not be offended by these acts of the state? The farmers will break the barricades. We know how to satisfy the hunger of people so we can overcome any obstacle to meet our demands.”

Another farmer Robindeep Singh said: “We have arranged food supplies to conduct our protests. We have also arranged warm clothes to face the cold. We are going to stay here in the night.” Moreover, heavy security has been deployed at the Rohtak-Jhajjar border, Delhi-Gurugram and Delhi-Jammu highway near Karna Lake in Karnal.

Furthermore, Delhi-Jammu Highway also saw heavy traffic jam due to a strike called by farmers on Thursday. Forces from at least two police stations, besides three Central Reserve Police Force battalions, have been deployed at the Delhi-Faridabad border.