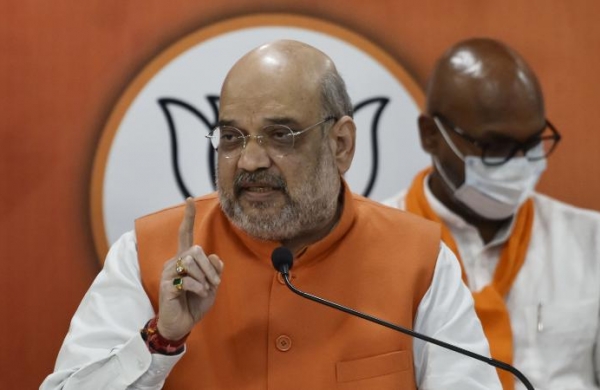 By Express News Service
NEW DELHI:  Union Home Minister Amit Shah issued directions to the Delhi Police to take strict action against those who indulged in violence on Tuesday during the farmers’ tractor rally.  In a two-hour meeting with senior officials from the home ministry, Intelligence Bureau and Delhi Police, Shah reviewed in detail the security situation in the national capital after violence broke out at farmers’ rally in several areas

Shah also asserted that law and order is restored as soon as possible, sources said, adding that he sought a detailed account of how things went out of control on Tuesday. Wielding sticks, clubs and holding the Tricolour and union flags, tens of thousands of farmers atop tractors broke barriers, clashed with police and entered the city from various points marching towards the Red Fort and hoisting the Nishan Sahib flag there on Republic Day.

Prior to this spate of violence, hundreds of farmers, mostly from Punjab, Haryana and UP, have been camping peacefully at several Delhi border points, including Tikri, Singhu and Ghazipur, since November 28. They are seeking a complete repeal of the three central agriculture laws and a legal guarantee on minimum support price for their crops.

Officials said the home minister is keeping a close eye on the developments and is monitoring the situation. Among those who attended the meeting were Home Secretary Ajay Bhalla, Delhi Police Commissioner SN Shrivastava and the Intelligence Bureau director.

Punjab, haryana on high alertHaryana and Punjab have sounded a high alert in the states and said anyone taking law into one’s hands will be dealt with strictly. Haryana DGP Manoj Yadava asked district police chiefs to be vigilant. Punjab CM Amarinder Singh asked DGP Dinkar Gupta to ensure that law and order is not deteriorated at any cost.

kids stranded for 2 hrs at fortAround 200 artistes, including children, who were part of the R-Day parade, were rescued after they got stranded near Red Fort on Tuesday. They were rescued by police personnel after being stuck for almost two hours in the afternoon, provided refreshments and subsequently escorted away.