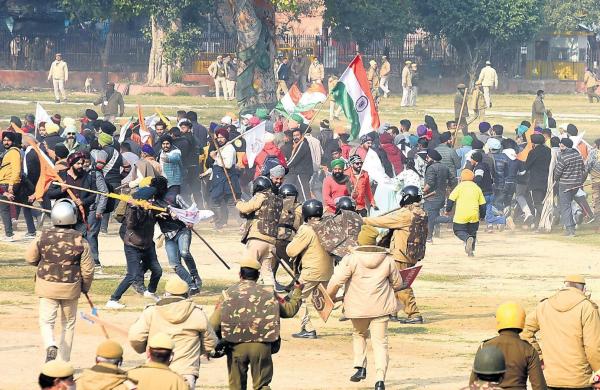 Express News Service
CHANDIGARH: As chaotic scenes unfolded in Delhi amid criticism of violence by a section of the farmers, leaders of the protestors alleged that anti-social elements infiltrated their peaceful agitation. Samyukta Kisan Morcha (SKM), umbrella body of 40 farmer unions, blamed the Kisan Mazdoor Sangharsh Committee (KMSC) for breaking rules and marching down unscheduled routes.

KMSC is not part of the platform of the 32 Punjab farmers unions, but it has been participating in farmers’ meetings.“They (KMSC) did not listen to SKM leaders, who pleaded with them not to force their way into Delhi. Also, Delhi Police and other elements misguided the farmers,’’ said a senior farmer leader.

KMSC was formed in 2007 after Satnam Singh Pannu, its present head, fell out with Kanwalpreet Singh, the then head of the parent group Kisan Sangharsh Committee. KMSC has presence in around seven districts in Punjab. Pannu had in the past been an activist of CPI (M). He said they marched on Ring Road and came back to Singhu, adding that they did not go to Red Fort.

Holding certain groups with vested interests responsible for the trouble, the Morcha maintained that things were peaceful from their end. “We thank farmers for the unprecedented participation in today’s parade. We also condemn and regret the undesirable and unacceptable events that have taken place today and dissociate ourselves from those indulging in such acts. Despite our efforts, some organisations and individuals have violated the route and indulged in condemnable acts,” said a statement.

Leaders of SKM added that they will try to get a clearer picture of what happened and release a statement after that. However, they insisted that by and large, events of the day were peaceful. Hannan Mollah, general secretary of All India Kisan Sabha, blamed outsiders. “There were a few anti-social elements who caused violence and clashed with police in some areas, to defame our peaceful  protest,” he said.

BKU, Punjab (Rajewal Group), chief Balbir Singh Rajewal distanced himself from those who caused trouble. He said the 32 unions from Punjab were following the routes and rules.