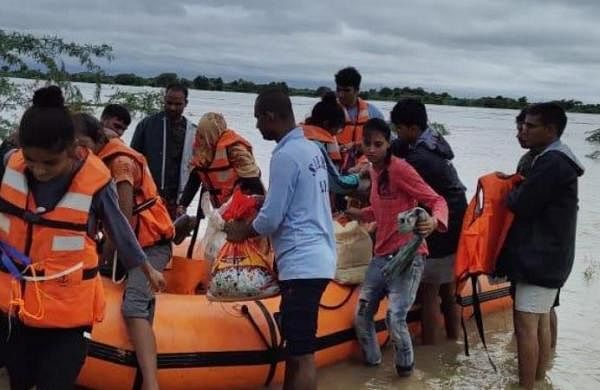 By Express News Service
BHOPAL: Surge in major rivers due to torrential rains and overflowing dams have caused major floods in a large part of the Gwalior-Chambal region of Madhya Pradesh and adjoining Rajasthan. Over 1100 villages in six districts of MP’s Gwalior-Chambal region have been hit by the flood. Among them, 200 are badly affected, while 22 have been marooned.

All major rivers, including Sindh, Kuwari, Kuno, Chambal and Parvati are in spate in most districts of the region, including Shivpuri, Sheopur, Datia, Guna, Gwalior and Bhind districts. Out of these districts, Shivpuri is worst hit.

“1600 people have been rescued so far by the state home guards, SDRF and NDRF teams, while the five helicopters of the Indian Air Force are airlifting people from various flood-hit villages, despite the weather being on the wrong side,” chief minister Shivraj Singh Chouhan said.

“The situation in Shivpuri is particularly grim as the district has reported 800 mm rainfall in just 48 hours. Our two cabinet ministers Yashodhara Raje Scindia and Mahendra Singh Sisodiya are camping in Shivpuri district and coordinating flood relief and rescue operations from a control room,” the CM said.

With the MP CM requesting Prime Minister Narendra Modi and Defence minister Rajnath Singh for armed forces, four columns of the Army, each column comprising 80 jawans have been rushed to MP from Gwalior and Jhansi to further accelerate the rescue of people stranded villagers — particularly in Shivpuri, Datia, Guna and Sheopur districts.

While two NDRF teams are already engaged in rescue operations and three more have been sent from Varanasi and Lucknow in UP.

In Datia district, two of three road bridges built over the Sindh river were washed out following the overflowing Manikheda Dam. Five trains have been partially cancelled or diverted by the West Central Railway’s Bhopal Division due to submerging of tracks between Shivpuri and Mahona.

Meanwhile, the IAF rescue operations by five helicopters which started on Monday couldn’t take off for a long time on Tuesday, owing to inclement weather, particularly hanging clouds.

Three villagers, including a teenager, had to spend around 15-20 hours on trees after being surrounded by flood in Bichi village of Shivpuri district. With the IAF copters not being able to reach the villagers stranded on the trees, it was the NDRF team that finally rescued them on Tuesday afternoon.

Meanwhile, there seems to be no respite in sight for rain-flood affected districts, as the Met Department has sounded red alert for five districts, including Shivpuri, Guna and Sheopur (Gwalior-Chambal region), orange alert for nine districts and yellow alert for eight districts.