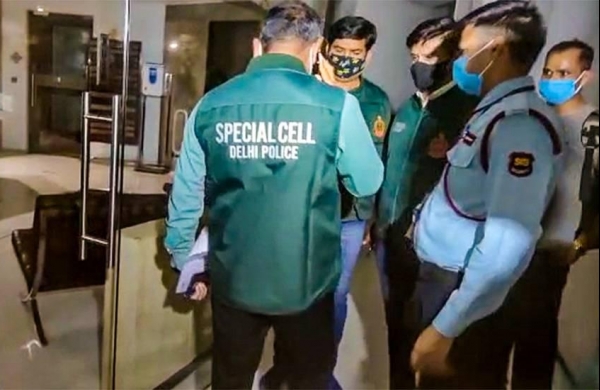 By PTI
NEW DELHI: The Delhi Police has served notices to two Congress leaders in the ‘Covid toolkit’ case, asking them to join the probe into a complaint in the matter, officials said on Tuesday.

A senior police officer confirmed that the notices were served to Congress social media head Rohan Gupta and party spokesperson MV Rajeev Gowda in connection with the probe.

“These are not fresh notices. These notices were served around 8-9 days ago based on a complaint received from the Congress. They were asked to join the probe so that it could help us in carrying the investigation forward,” the officer said.

A priliminary enquiry into the complaint is still being carried out by the Delhi Police’s Special Cell team and no FIR has been registered in the matter yet, officials said.

On Monday, the Delhi Police’s Special Cell sent a notice to Twitter India in connection with the probe into a complaint about the alleged ”COVID toolkit”, asking it to share information based on which it had classified a related tweet by BJP spokesperson Sambit Patra as “manipulated media”, officials had said.

The police teams also descended on the microblogging site’s offices in Lado Sarai in Delhi and in Gurgaon Monday evening.

“The Delhi police team went to the Twitter office to serve a notice to Twitter as a part of routine process. This was necessitated as we wanted to ascertain who is the right person to serve a notice, as replies by Twitter India MD have been very ambiguous,” Delhi Police PRO Chinmoy Biswal had said The BJP has accused the Congress of creating a ”toolkit” on how to tarnish the image of the country and Prime Minister Narendra Modi over the handling of the COVID-19 pandemic.

However, the Congress has denied the allegation and claimed that the BJP is propagating a fake ”toolkit” to defame it.

Twitter says it “may label Tweets that include media (videos, audio, and images) that have been deceptively altered or fabricated”.

Biswal said the Delhi Police is inquiring into a complaint in the toolkit matter.

“It appears that Twitter has some information which is not known to us and on the basis of which they have classified it (Patra’s tweet) as such. This information is relevant to the inquiry. The Special Cell, which is conducting the inquiry, wants to find out the truth. Twitter, which has claimed to know the underlying truth, should clarify,” he said.

The government had earlier asked Twitter to remove the ”manipulated media” tag as the matter is pending before law enforcement agency, and made it clear that the social media platform cannot pass judgment when the issue is under investigation.

BJP leaders, including Patra, have posted numerous tweets to attack the Congress over the purported ”toolkit”.

Surjewala has alleged that the “forged, fabricated material” and the claims made under the #CongressToolkitExposed by various ministers are identical to the material that has already been marked as ‘manipulated media’ by Twitter.

He alleged that the subject matter of the forged Toolkit document was created by certain BJP leaders to gain undue and wrongful political advantage by spreading potentially dangerous, false and fabricated material through their Twitter handles against the Indian National Congress and its leaders.

Surjewala said, “It is a matter of fact that people tend to believe ‘true’ and take on face value, any information that is put up directly by a Union Minister of the Government of India through his/ her official/ verified Twitter account.”

“Hence, it becomes all the more imperative to tag, ‘manipulative media’ (sic), on all such tweets made by Ministers of the Government of India on the above referred forged toolkit document created by the BJP,” he said in his complaint.

“It is reasonable to expect that the aforementioned individuals will be dealt with the same yardstick as applied in other cases where the Twitter platform is misused to broadcast forged and fabricated material,” he also said.

This comes a day after Delhi Police’s Special Cell sent a notice to Twitter India in connection with the probe into a complaint about the alleged ‘COVID toolkit’, asking it to share information based on which it had classified a related tweet by BJP spokesperson Sambit Patra as “manipulated media”, with two police teams descending on the microblogging site’s offices in Lado Sarai in Delhi and in Gurgaon on Monday evening.

The Congress has accused BJP leaders, including union ministers, of misusing the Twitter platform to disseminate forged and fabricated material.

The Congress had earlier complained to Delhi police to register an FIR against BJP leaders for allegedly spreading “false” information about the Congress toolkit.

The NSUI has already registered an FIR against Raman Singh and Sambit Patra in Raipur, Chhattisgarh, where the Congress is in power.