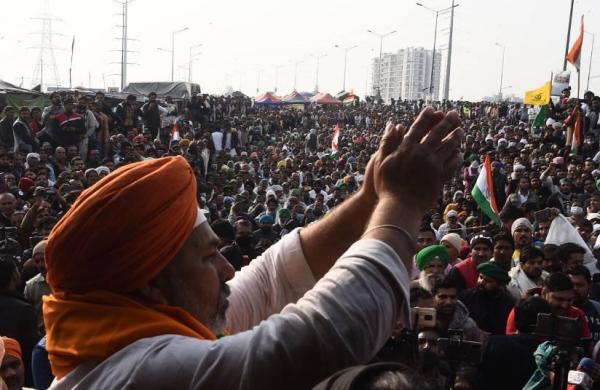 By PTI
NEW DELHI: Samkyukta Kisan Morcha, an umbrella body of protesting farm unions, on Monday accused Union Agriculture Minister Narendra Singh Tomar of “insulting” farmers by his remarks that mere gathering of a crowd does not lead to revocation of the three farm laws.

In a statement, the Morcha alleged that the current protests are a consequence of “deep unhappiness” and anger that was allowed to build up in farmers’ minds by the government.

On Sunday, Tomar had reiterated that the Centre was ready to talk to the farmers protesting against the new agriculture laws, and said that mere gathering of a crowd does not lead to revocation of legislations.

“Today, farmers are getting support pouring in from all sides, nationally and internationally. The protestors are not a crowd, but our annadatas, thanks to whom we are all alive today, including people in the government.”

“The party in power collected votes from this very crowd and this sort of insulting attitude towards our farmers is highly condemnable,” the SKM said in statement.

It also stated, “Tomar insulted the farmers’ movement by saying that ‘laws cannot be repealed by collecting a crowd’.”

Thousands of farmers, mostly from Punjab, Haryana and Western Uttar Pradesh, have been camping at three Delhi border points — Singhu, Ghazipur and Tikri — for over the last 85 days, demanding a complete of three farm laws and a legal guarantee on the minimum support price for their crops.

Morcha in statement congratulated the Khap leaders in several places in Uttar Pradesh for standing in solidarity with the farmers’ movement.

BKU leader Rakesh Tikait said on Monday that the protest against the Centre’s agri-marketing laws could go on for a long time and urged farmers to force “the king of looters” out of Delhi.

He also accused “the king” of putting a value on bread.

“He is the last king of looters (luteron ka badshah). He has to be forced out of Delhi,” Tikait said without naming anyone at a “kisan mahapanchayat” in Nohar of Hanumangarh.

“He does not have any affection towards the flag and the country. He is a businessman,” Tikait added.

The farmer leader also said a beggar and a businessman do not have affection for the country and the fields as they go wherever they get the right money.

“A businessman and beggar do not have affection for the country and fields. A beggar will move wherever he gets right money and a trader will do the work where he gets profit,” Tikait said, adding that the fight against the laws could go on for long and till a legislation guaranteeing the minimum support price is enacted, people should remain prepared to march to Delhi.

Earlier in the day, Tikait at a farmers’ “mahapanchayat” at Haryana’s Sonipat had said when people gather governments get changed.

Tikait said this a day after Union Agriculture Minister Narendra Tomar said in Gwalior that the Centre is ready to talk to the farmers protesting against the new laws and that mere gathering of crowd does not lead to revocation of legislations.