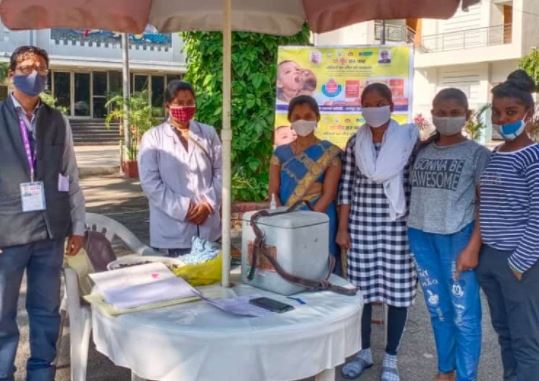 On the last day of the National Pulse Polio Campaign, on Tuesday, activists are giving a dose to the abandoned children from house to house. National Pulse Polio campaign is being conducted in the district including the state from January 31 to February 2. In this, on January 31, in the booth, on 1 and 2 February, the abandoned children are being given door-to-door polio supplements. For this, the target was to provide medicine to 3.42 children in Raipur district under the campaign.

Here, District Panchayat President Domeshwari Verma said that two drops of pulse polio makes us stronger in the physical struggle of life. Prevents loss from polio. All mothers take their babies to the polio booth and make them strong by giving them two drops of life. Mahesh Verma, 36, a resident of village Chicholi Tilda, administered polio to his child.

The Health Department said that Anganwadi centers of Women and Child Development Department were also operated to make the Pulse Polio campaign successful. In particular, identification of high risk area, railway colony, Ghumantu family, brick kiln, urban slum etc., and the benefit of children of pulse polio from 0 to 5 years are being given.