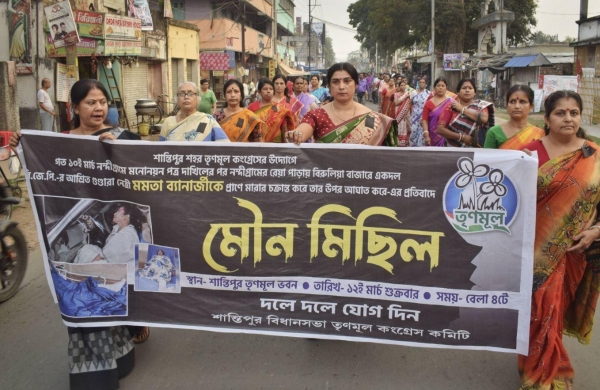 By PTI
KOLKATA: The BJP on Friday accused the TMC of trying to stir a political crisis in West Bengal by floating conspiracy theories on the March 10 Nandigram incident, in which Chief Minister Mamata Banerjee was injured, as the ruling party in the state “is losing ground from under its feet”.

Asserting that the BJP has demanded a full-fledged inquiry into the incident and wished a speedy recovery of Banerjee so that she can participate in her electoral campaigning, party spokesperson Shamik Bhattacharya said even senior TMC leaders are “distorting the state administration’s version” of the incident to give credence to the conspiracy angle for political gains.

“However hard the TMC leaders may try to float conspiracy theories, they are only dishing out false information on the Nandigram incident. They are trying to create a political crisis. Their insinuations of EC are akin to showing disrespect to the Constitution,” Bhattacharya told reporters.

He said it was in TMC’s bad taste to link the Nandigram incident with Prime Minister Narendra Modi’s jibe at Banerjee during the BJP’s Brigade rally on March 7 over her failed attempt to ride an electric scooter solo.

“The prime minister had never said that the CM will get injured in Nandigram. He had said that had Banerjee fallen from the scooter and suffered injuries, she would have blamed its manufacturer,” he said.

Bhattacharya said that the prime minister had made a comparison between Banerjee’s failed attempt to ride a scooter with her electoral battle in Nandigram only to signify her impending defeat in the seat.

“Every orator has his/her own style of speaking. It is in poor taste to link the PM’s comment made on March 7 with the injury suffered by Banerjee on March 10 in an accident,” he said.​

ALSO READ | Attacks and injuries shaped Mamata’s four-decade-long political career​​Referring to the attack on BJP chief J P Nadda’s convoy in South 24 Parganas district in December last year, he said that the TMC had then made light of the incident unlike the BJP’s response to the Nandigram incident.

“We want her (Banerjee) to take part in the electoral process,” he said.

Response to the outreach programme of Suvendu Adhikari, the BJP candidate in Nandigram seat and former aide of Banerjee, over the last few days shows that the TMC will suffer poll reverses in the constituency.

“The Centre never sought to topple an elected government. The TMC will be defeated by the people in the upcoming assembly elections,” he said.

Elections to the 294-member assembly will be held from March 27 to April 19.

Results will be declared on May 2.