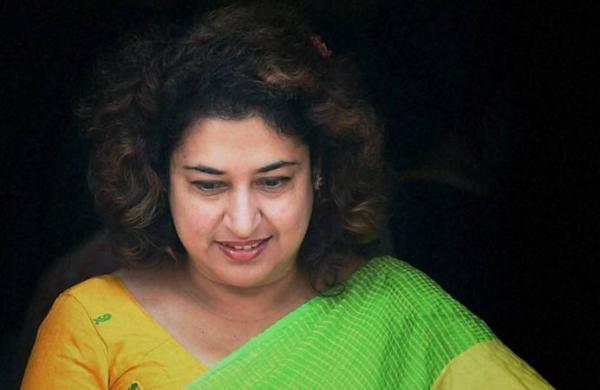 By Express News Service
KOLKATA: Actor-turned-Trinamool Congress MP Shatabdi Roy’s cryptic message on social media on Thursday night triggered strong speculations about her next political move amid a series of defection from the TMC to the BJP ahead of the upcoming Assembly elections.

The two-time MP from Birbhum, who was interrogated by the ED in connection with a chit fund scam, expressed her dissent for not being kept in the loop about party affairs.

Roy said she would fly to Delhi on Saturday morning and she “might or might not” meet Union Home minister Amit Shah.

Shatabdi’s dissent resulted another course of embarrassment in the ruling party’s camp within a month after another sitting MP from East Burdwan constituency defected to the BJP.

The MP said she would inform on Saturday if she takes any decision related to her next political move.

Bengal BJP functionaries, however, said they would welcome if she decides to join the BJP.

“She (Shatabdi) joined the profession to serve the people, not for the sake of her own interest. We will welcome her if he decides to come under the fold of the BJP,” said BJP’s vice-president in Bengal.

“I used to have regular intimate communication with the people of my constitution. But nowdays, many people have been asking me why I am not seen in the party events. I tell them I want to go everywhere. I love to be with you but I guess, some people don’t want me to go to you. I don’t get details of party’s regular events in the area. How can I go if I don’t know? It hurts me mentally,” Shatabdi wrote on a social media post, adding, “If I take any decision, I will inform you on Saturday, January 16, at 8 pm.”

Asked about the purpose about her Delhi visit at a time when BJP’s Bengal functionaries are in the national capital and whether she would meet Shah, Shatabdi said, “I am a two-time MP and I have a house in Delhi. I frequently to there to attend meetings and other purposes. Coming across someone is not an unusual event. Nothing is scheduled.”

TMC MP and spokesperson Saugata Roy said, “I was trying to contact her over phone from last night but could not. Today, I talked to her and informed the party’s leadership about the content of our discussion.”

Former TMC’s Rajya Sabha MP Kunal Ghosh went to Shatabdi’s house and held a meeting with her. But Ghosh refused to disclose what were the issues he discussed with her saying, “Shatabdi is a good friend of mine. I just came to chitchat with her.’’