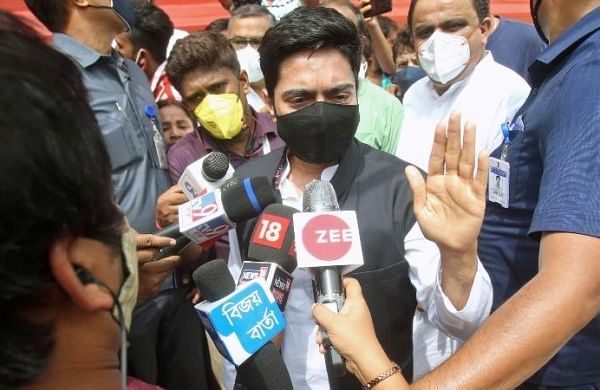 By PTI
KOLKATA: A TMC MLA on Tuesday threatened to “look after” BJP leaders and workers in Dinhata area of West Bengal’s Coochbehar district “in a proper manner”, a day after the convoy of party national general secretary Abhishek Banerjee allegedly came under attack in BJP-ruled Tripura.

The BJP demanded penal action against Dinhata MLA Udayan Guha for issuing a threat in public against activists of an opposition party.

“After the Tripura incident, BJP workers and leaders in Dinhata will have to be looked after in a proper manner,” Guha’s Facebook post in Bengali read.

The post triggered a storm on social media, with many flaying the legislator for his statement while others extending support to him.

Guha’s hand was fractured in post-poll violence in Dinhata in May.

Criticising the TMC MLA, who is the son of late Left Front leader Kamal Guha, BJP’s Natabari legislator Mihir Goswami said, “We demand that a case be lodged against Udayan Guha and action be taken against him.

It seems that the stinging NHRC observations against him regarding post-poll violence and its perpetrators are justified.”

Reacting to Goswami’s demand, senior TMC leader and state Agriculture Minister Sobhandeb Chattopadhyay claimed that Guha was literally speaking about “taking care of BJP workers, to live peacefully with them and ensure not a single saffron party member in Dinhata is harmed in retaliatory action.”

“Only a party like BJP can twist such a comment which by no stretch of imagination means taking the law into one’s hands or teaching the BJP a lesson,” the veteran TMC leader told PTI.

He said that the BJP should explain why no action was taken against police officers who were on duty during the “brazen and audacious” attack on Abhishek Banerjee in Tripura.