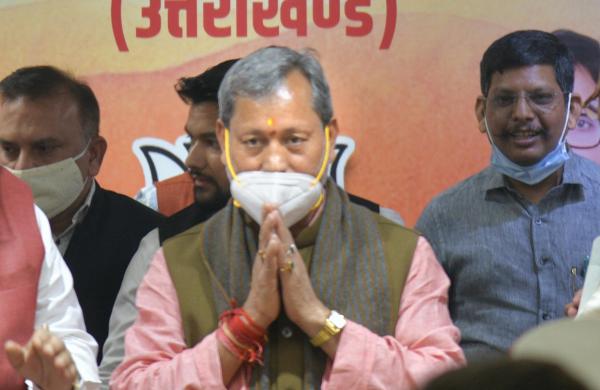 By ANI
DEHRADUN: Tirath Singh Rawat, BJP’s Lok Sabha MP from Garhwal, on Wednesday took oath as the new chief minister of Uttarakhand. He replaces Trivendra Singh Rawat who had stepped down from the post on Tuesday.

Earlier in the day, Tirath Singh had met Governor Baby Rani Maurya to stake a claim to form the government in the state.

The 56-year-old was elected as leader of the BJP legislature, party paving way for him to take over as the state chief minister.

In the early days of his political career, he was part of the Uttar Pradesh Bharatiya Janata Yuva Morcha, the BJP’s youth wing, where he served as the state vice-president for some time before being elected to the Uttar Pradesh Legislative Council in 1997.

He was the first education minister of Uttarakhand in 2000. He was elected first as BJP’s Uttarakhand general secretary in 2007 and later as the party’s state unit chief in 2013.

In 2019, Tirath Singh became an MP from the Garhwal Lok Sabha seat.

Trivendra Singh’s resignation had come after BJP general secretary in-charge of Uttarakhand Dushyant Kumar Gautam and former Chhattisgarh Chief Minister Dr Raman Singh, submitted a report to the BJP’s central leadership, detailing the rebellion in the state unit of the party, as per sources.

The BJP had swept the elections in 2017, winning 57 seats in the 70-member Uttarakhand Assembly. Congress, on the other hand, were able to win just 11 seats.