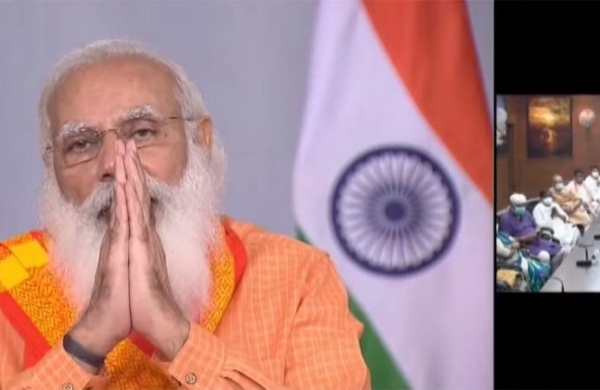 By PTI
NEW DELHI: The Congress on Friday said Prime Minister Narendra Modi has been missing in action all through the COVID-19 pandemic and it is time for him to act instead of giving speeches and advice.

The party said India needs compassion and healing instead of “tears of guilt” and a strong resolve to defeat COVID-19 through good governance.

Earlier in the day, Modi had turned emotional while paying condolences to those who lost their lives due to coronavirus during a virtual interaction with doctors, paramedical staff and frontline health workers in his parliamentary constituency of Varanasi.

Congress leader Rahul Gandhi took a swipe at the prime minister saying he should provide people vaccines instead of procrastinating.

“Mr Modi, Vaccinate! Don’t Procrastinate,” he said on Twitter and shared a media report claiming that 70 per cent of districts have received less than 20 doses per 100 population.

Congress general secretary (organisation) K C Venugopal said instead of giving speeches and advice, it is time the prime minister acted as he has been missing during the pandemic.

“Now, the country is asking again and again what action you have taken. Instead of speeches, instead of advice, we need actions from the central government,” he added.

Venugopal said Rahul Gandhi had cautioned the prime minister about the COVID-19 “tsunami” last year, but everybody took it very lightly and instead mocked the Congress leader.

Recalling Modi’s remark in March last year that the Mahabharata war was won in 18 days but the war against coronavirus will take 21 days — referring to the 21 day nation-wide lockdown announced by him back then — Venugopal said the prime minister is now realising that it is a long battle.

But, for fighting this long war, how much precaution has been taken by the central government, the country is now asking, he said.

Venugopal asked how the central government was compensating the poor people who have lost their livelihoods as most states are under a lockdown.

“What is the government going to do? There is no answer,” Venugopal said.

He also sought to know the government’s plan to tackle the shortage of oxygen and medicines even as the threat posed by increasing cases of ‘black fungus’ is looming large.

Meanwhile, Congress spokesperson Pawan Khera wondered if the prime minister shedding tears will console those who have lost their dear ones to COVID.

Attacking the prime minister for centralising everything, he said, “You have all authority centralised and when you fail, you try and decentralize responsibility; it does not work this way.”

Meanwhile, Venugopal demanded that the government should procure vaccines soon and inoculate all Indians to save them from the virus.

Earlier, he spelt out a host of measures undertaken to help those affected from COVID on Rajiv Gandhi’s 30th death anniversary on Friday.

He said Rajiv Gandhi’s compassion and resolve to boldly take the road less travelled and implement out of the box initiatives was legendry and with his unfathomable dedication to change India, Congress workers across the country rededicate themselves to the life of their leader, who not only dared to dream but implemented life altering transformation and change.

He said millions of Congress workers and leaders undertook a special ‘SEVA’ drive today in the service of the people and dedicated themselves to the service of people in times of the COVID-19 pandemic.

“As a deliberately negligent and callous leadership in the central government was caught napping during the second coronavirus wave, which hit the country in January-February 2021, Indian National Congress and its frontal organisations, especially the Indian Youth Congress, have done stellar work in the service of fellow countrymen, with dedication and humility,” he said.

“Providing free ambulance and hearse vehicles, oxygen and oxygen concentrators, medicines, and home isolation kits, from arranging plasma donors to tele-consultations, from providing dry ration to food packets and even assisting in cremation and burial of the loved ones; Indian National Congress and its workers have shown the fortitude and resilience in the most painful times,” he claimed.

“The Congress will continue to be at the service of every single Indian across the country to hold their hand, to be of service and to try and ease the troubles. These initiatives will be ongoing for as long the pandemic continues,” he said.

Vardhan also said that each death was unfortunate and the government was making every effort to fight the pandemic.

He said as cases were declining, recoveries have started rising and mortalities would decline soon too.

“The number tested is also around 20 lakh per day. If the positivity rate is coming down, why is the number of deaths above 4000 per day? Is it because of lack of proper medical care because of shortage of oxygen, medicines, ventilators, hospital beds etc,” Chidambaram asked on Twitter.

“The Medical experts who are giving numerous interviews should answer the following questions: When the number of daily fresh infections has come down from 4 lakh+ to 2.5 lakh+, why is the number of deaths still above 4000 per day,” the Congress leader also asked.

Vardhan replied to him on Twitter, saying, “Such a travesty! Political compulsions forcing Sh P Chidambaram Ji to raise such questions.”

“By order of toolkit party I am sure. Certainly he’s privy to general knowledge that time duration between contracting COVID19 and recovery/mortality mostly exceeds a few weeks,” he said.

“Why raise unnecessary doubts? As cases have been declining, recoveries have started reflecting an upward trajectory, and the mortalities shall show a decline too,” he said.

“Each death is most unfortunate, GoI is moving heaven and earth to fight this pandemic,” Vardhan said.

India will be in a position to vaccinate at least all of its adult population by the end of 2021, Health Minister Harsh Vardhan said on Friday.

At a meeting to review the pandemic situation in nine states and union territories, the minister said, “Between August and December 2021, India will have procured 216 crore vaccine doses, while by July this year, 51 crore doses will be procured.”

Vardhan touched upon the speculation that the virus might mutate in future and endanger children, and said that the health facilities are being upgraded to deal with any such exigency, according to a health ministry statement.

Vardhan also cautioned against the emerging trend in the country.

He highlighted that now the smaller states are showing an upward trend and there is a dire need to be extremely cautious, the statement said.

He asked the states to follow the basic principles of COVID-19-appropriate behaviour along with testing, tracking, tracing, treating and now vaccinating to fight against the pandemic.

He emphasised the need to step up vaccination and reiterated the need to dedicate 70 per cent of vaccines provided by the central government for the second dose.

He also requested the states and UTs to be vigilant against wastage of jabs, the statement said.

The minister who reviewed public health response to COVID-19 and progress of vaccination in Chhattisgarh, Goa, Himachal Pradesh, Puducherry, Andaman and Nicobar Islands, Chandigarh, Dadra and Nagar Haveli and Daman and Diu, Ladakh, and Lakshadweep informed that all the states and UTs have been asked to notify black fungus (Mucormycosis) as an epidemic and ensure that all cases are duly reported.

He assured that all the necessary information and guidelines regarding diabetes control and restricted use of steroids have been provided to states, the statement stated.

He highlighted that daily recoveries have outnumbered the daily new COVID cases for the last 8 days consistently, the statement.

Underscoring the critical importance of vaccination drive, the minister highlighted that India has administered a total of 19,18,89,503 vaccine doses to its citizens.

He stated that the government is in the process of supporting the manufacturer of vaccines for ramping up vaccine availability in the country.

He expressed hope that in the subsequent months, there will be an exponential rise in production of vaccines in the country, the statement said.

“Between August and December 2021, India will have procured 216 crore vaccine doses, while by July this year, 51 crore doses will be procured,” he was quoted as saying in the statement.

The Union Health Minister also said that by the end of the year, the country will be in a position to vaccinate at least all of its adult population, the statement said.

Vardhan presented a snapshot on the COVID situation in all the states and UTs.

In Chhattisgarh, intense transmission has been observed since March 2021.

The state was observing a near positivity rate of 30 per cent at the start of May.

In Himachal Pradesh, there are more than 35,000 active cases, while the fatality rate (1.44 per cent) is much higher than national average, the statement said.

Vardhan underlined the issues like complacency, marriages, super spreader events etc, for the steep rise in cases in Himachal Pradesh, the statement stated.

He informed that Goa is witnessing a rising trend with 22,000 active cases.

Daman and Diu has 366 active cases and a declining trend is being observed.

Similarly Ladakh is also showing a declining trend with 1,500 active cases at present, the statement said.