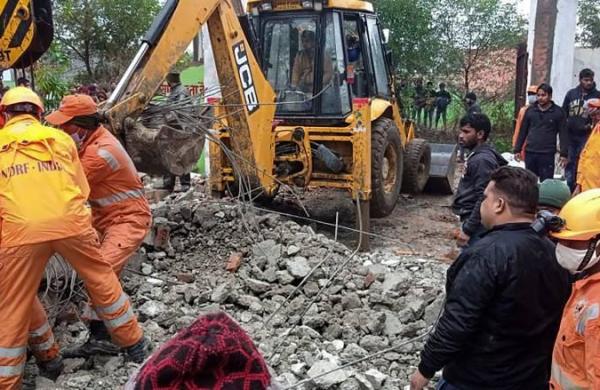 By Express News Service
NEW DELHI: Three civic officials were arrested on Monday over the collapse of a crematorium roof that claimed 24 lives here as tension spiralled in the area with the families of the victims blocking the Delhi-Meerut highway by placing two bodies on the road to press for their demand for higher compensation.

They lifted the blockade and agreed to cremate the bodies after hours of protest as officials agreed for Rs 10 lakh compensation and a government job for each victim’s family, Superintendent of Police (Rural) Iraj Raja said.

He said that Muradnagar Nagar Palika Executive Officer Niharika Singh, Junior Engineer Chandra Pal and Supervisor Ashish were arrested this morning as they were involved in the tendering process for building the structure that collapsed Sunday, killing 24 people and injuring 17 others.

Officials said construction work for the shelter at the crematorium, estimated to cost around `55 crore, was started two months ago and it was opened for public nearly 15 days ago.

The road blockade near the Muradnagar Police Station had led to a massive traffic jam with hundreds of vehicles getting piled up during the morning rush hour.

The protesters were insisting District Magistrate Ajay Shankar Pandey be called for a talk with them so that they can register their demands including Rs 20 lakh compensation for each of the grieving families and a government job for one of their members.

The DM, SSP Kalanidhi Naithani and other senior officials later reached the protest site and spoke to them over their demands, officials said.

Meanwhile, Uttar Pradesh Congress chief Ajay Kumar Lallu lashed out at the Yogi Adityanath government over the incident, saying it was a “living example of organised corruption” in the state.

In a statement issued here, he said the roof collapse showed “sub-standard material” was being used in construction works, and alleged government officials and contractors were putting the lives of people in danger for earning themselves “commission”.