Thousands of farmers attend ‘mahapanchayat’ in Muzaffarnagar to back BKU 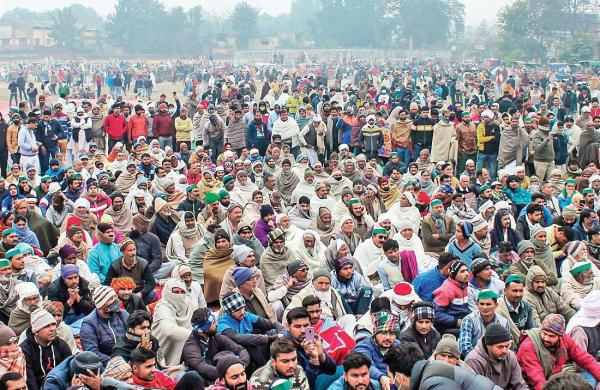 By Express News Service
NEW DELHI:  Tens of thousands of farmers gathered in Muzaffarnagar town on Friday to attend a mahapanchayat in support of the  Bharatiya Kisan Union-led protest against the Centre’s new farm laws in Ghazipur on the Delhi-Uttar Pradesh border.

A day after BKU leader Rakesh Tikait broke down at Ghazipur and tension spiralled amid fears that the farmers who had been camping there would be forcibly removed by the local administration, all roads in western Uttar Pradesh it seemed led to Muzaffarnagar.

The GIC ground near Mahaveer Chowk was packed, a sea of people congregating to back the protesters at UP Gate in Ghazipur. Hundreds of tractors with the tricolour and flags of farm unions were parked along city roads, disrupting traffic movement.

The GIC ground was the centrestage and scores of regional farmer leaders took the mike to back the protesters at the UP Gate in Ghazipur.  As Muzaffarnagar became the meeting point for farmers,  Rashtriya Lok Dal (RLD) chief Ajit Singh also announced support for the BKU and his son, party leader Jayant Chaudhary, participated in the mahapanchayat too.

Singh, RLD president and former Union minister, had spoken to BKU president Naresh Tikait and spokesperson Rakesh Tikait, party vice president  Chaudhary said. “It is a matter of life and death for farmers, but do not worry. All have to stay together, united in this — this is Chaudhary saahab’s (Ajit Singh’s) message,” the RLD vice president said in a tweet in Hindi.

The Tikait brothers, sons of legendary farm leader Mahendra Singh Tikait, are leading the BKU. Members of the group have been protesting at Ghazipur for more than two months to demand  a rollback of the contentious farm laws brought by the Centre in September year.