Those who bow before Modi’s wrong decisions follow Hindutva: Rahul 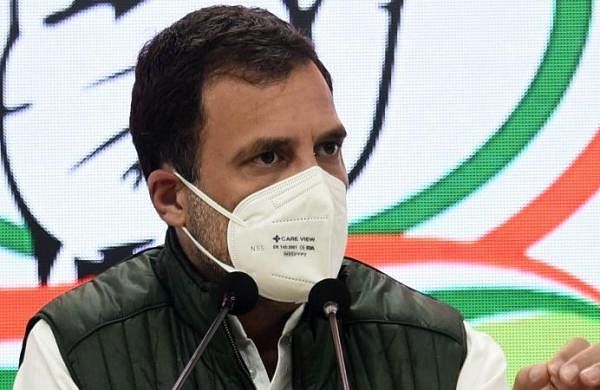 JAIPUR: In a scathing attack on the BJP and the RSS, Congress leader Rahul Gandhi on Tuesday said those who bow before the wrong decisions of Prime Minister Narendra Modi are the ones who follow Hindutva.

He said those who face challenges head on are Hindus and those who run away from problems out of fear are the ones who follow Hindutva.

“Those who believe in the ideology of Hindutva bow before anyone — they bowed before the British and they bow before money because there is no truth in their hearts,” Gandhi said in a virtual address to a Congress training camp organised by the Rajasthan unit of the party.

He also said a prime minister from the Congress would have resigned for failing to discharge his duty had China occupied Indian territory.

“Whereas the RSS people are engaged in hiding the violation of India’s borders by China under the Modi regime,” a release issued by the Congress quoted the former party chief as saying.

Gandhi said he had once asked a gathering of Congress workers whether there was anyone among them who had run away from home and no one answered in the affirmative, adding that if the same question is asked at an RSS meeting, everyone would say “yes”.

He said a person who runs away cannot fulfil any duty.

The Congress leader alleged that those associated with the Rashtriya Swayamsevak Sangh (RSS) are spreading hatred and fear in the country.

Gandhi said all religions, including Hinduism, Islam, Sikhism and Christianity lead to the path of truth but “Hindutva” is a means to grab power.

He said the country’s first prime minister, Jawaharlal Nehru, was jailed for 12 to 15 years but neither hatred nor vengeance overpowered him, whereas Vinayak Damodar Savarkar has mentioned in his book that he was most pleased when five of his companions together beat up a Muslim man with sticks.

The Congress leader said no one can call Mahatma Gandhi and Nehru cowards because there was neither fear nor hatred in their hearts.

He on Tuesday said the world is watching developments within the country, citing reports of “persecution” of Christians in India in a section of the global media.

“While many in our own country are living with their heads buried in sand, the world is watching,” Gandhi said on Twitter referring to a report in ‘The New York Times’ titled ‘Arrests, Beatings and Secret Prayers: Inside the Persecution of India’s Christians’.

“In times of injustice, silence is complicity,” the former Congress president said in the tweet with the hashtags “SpeakUp” and “NoFear”.

Expressing concern over alleged provocative remarks made at a recent event in Uttarakhand, Rajasthan Chief Minister Ashok Gehlot on Tuesday said the country needs to understand the crux of the debate of ‘Hindu versus Hindutva’ started by Congress leader Rahul Gandhi.

“Rahul Gandhi started a debate on Hindu versus Hindutva, and there is a need to understand its meaning. The crux was that on one hand, there is a Hindu whose great values have been there for centuries, whose expressions are of love and brotherhood and the forces which are doing politics in the name of Hindutva, their becoming Hindu is pseudo, they are fake Hindus,” he told reporters here.

Extremely provocative speeches inciting violence against Muslims were allegedly made by participants at the event held at Ved Niketan Dham in Uttarakhand’s Haridwar from December 16 to 19.

It was organised by Yati Narasimhanand, the priest of Dasna temple in Ghaziabad.

Gehlot said the language used at the event was shameful.

“We respect the saints and their saffron clothes itself give the message of sacrifice and culture, but the words that some of those saints have spoken were shameful and condemnable”, he said.

The chief minister said people need to understand that the country is passing through a very difficult phase and at such a time, the country needs the Congress organisation, its ideology, policy and programmes.

He asserted that no matter how much force is used, the agenda of “Congress-free India” will not be fulfilled.

“Those who talk of ‘Congress Mukt Bharat’ will become ‘Mukt’,” he said.

“Congress rules in the hearts of the people across the country. Everyone knows that in the freedom struggle, how many people went to jail and made sacrifices and gave a message of unity, which forced the British to quit India,” he said.

Gehlot said that the Constitution is under threat, institutions are being destroyed, and the entire country is concerned.

He said Congress workers should take a pledge to strengthen the party by following and spreading its principles, policies and programmes.

“I would like to tell the party workers that the future of the country depends on you. You should brainstorm on the current situation, unite and stand firmly with the common man. Unite to face the challenges which are there in front of the country, be it inflation or unemployment,” he said.