Those saying Abhishek will be next Bengal CM are trying to create confusion: Trinamool hits back at Shah 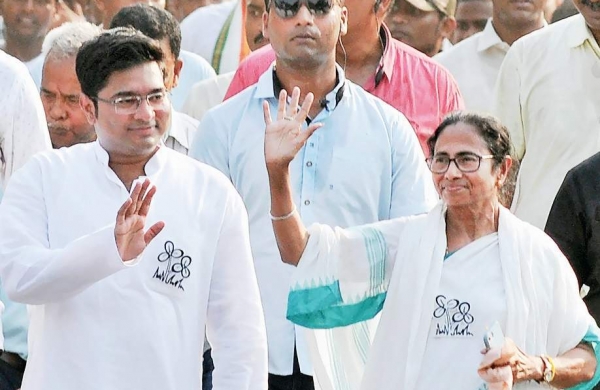 By PTI
KOLKATA: The Trinamool Congress said on Sunday that Mamata Banerjee will be the chief minister of West Bengal for the third time when the party is voted to power, asserting that those suggesting her nephew Abhishek Banerjee will be appointed to the top post are trying to create confusion.

Speaking to reporters, senior TMC MP and spokesperson Saugata Roy said that the party has made it clear time and again that it is contesting the upcoming elections with Banerjee as the chief ministerial face.

“Everyone knows that Mamata Banerjee will be our chief minister for the third time. How can Amit Shah make such a claim? There has been no talk in the party to appoint Abhishek as the future CM. Such claims are only aimed to create confusion,” Roy said.

Addressing a BJP rally in Howrah virtually, Shah claimed that the agenda of the TMC dispensation is to make Banerjee’s nephew the next chief minister of the state.

Hitting out at BJP leader Rajib Banerjee, Roy said that people like him are certainly “traitors” as they enjoyed every benefit of staying in power and deserted the party just before the elections.

Rajib, who switched over to the BJP from TMC on Saturday, told the rally in Howrah that the more the leaders who changed sides are called traitors, the more they will get people’s support.

Speaking at a press conference, TMC leader and state minister Chandrima Bhattacharya said that leaders who are coming to the state ahead of the elections to “mislead the people” are justly called “outsiders”, in an apparent reference to Shah.

She said people of different communities living in the state are not branded “outsiders” by her party, but those coming to the state for making false claims.

Without naming anyone, Bhattacharya said MPs from Uttar Pradesh, “an unemployed” politician from Madhya Pradesh, a leader from Gujarat are coming to the state before the polls to mislead the people.