This road and chowk will be known as Padmashri Pt. Shyamlal Chaturvedi, Chief Minister will inaugurate 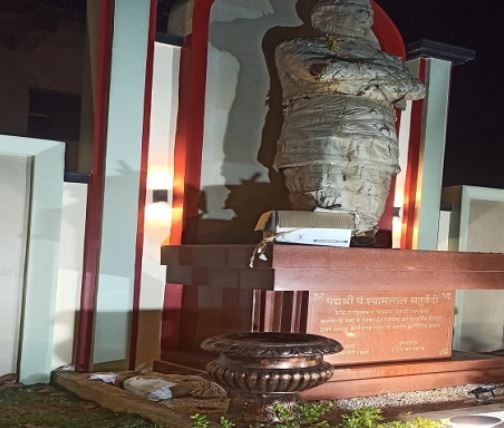 The state government has done a great job of cherishing the memories of Padmashri Pt. Shyamlal Chaturvedi, one of the emblems of Chhattisgarhi identity and one of the great personalities of the state. Following the instructions of Chief Minister Bhupesh Baghel, a major road in the city and Chowk on behalf of Bilaspur Municipal Corporation and Smart City has been named after Pt. Shyamlal Chaturvedi.

Under this, the kerosene route was changed to Smart Road under Smart City. This road constructed at a cost of 8 crores is the first smart road in the city. This road is named after Pt. Shyamlal Chaturvedi. At the same time, a grand statue of Pt. Shyamlal has also been installed at Rajendra Nagar Chowk.

On 3 January, during his stay in Bilaspur, he will inaugurate the statue and inaugurate the smart road. According to the scheduled program, Chief Minister Bhupesh Baghel will reach Rajendra Nagar Chowk at 4 pm. Preparations for the statue unveiling and inauguration program have been completed by the municipal administration.

Shashikant Chaturvedi, son of late Shyamlal, while thanking the state government and the municipal administration said that this will be an emotional moment for all of us. Certainly, the way he has lived Chhattisgarhi and Chhattisgarh for a lifetime is memorable for all of us. We are happy that the Chief Minister has done a big work to underline Babuji’s memories and his works.

It is worth noting that in 2018, Pt. Shyamlal Chaturvedi was awarded the Padma Shri by the Government of India for his outstanding service to education and literature. He went to the other side of the world in December 2018, after battling illness for a long time.