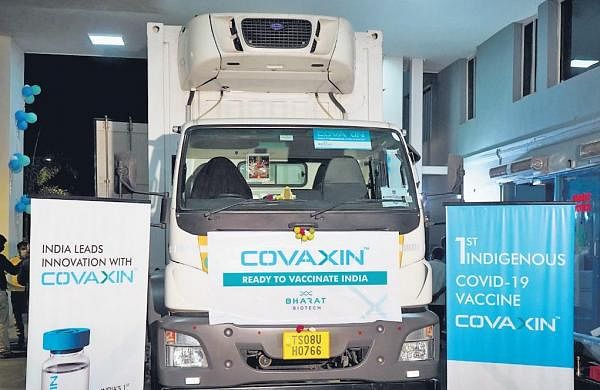 NEW DELHI: A third booster dose of Covaxin, the Covid19 vaccine by Bharat Biotech, is safe and immunogenic and may be beneficial to ensure persistent immunity to prevent breakthrough infections, a phase 2 randomised, double blind study has shown.

The study led by the company but in which 11 institutions included ICMR, AIIMS New Delhi and some international collaborators also participated, has shown that neutralisation titers against wild – type and Delta variants were 5 times higher in those with the third dose than in people after a two-dose schedule.

Based on the findings, Bharat Biotech underlined that while protection against the severe disease remains high across the full six months—following full vaccination with Covaxin—a decline in efficacy against symptomatic disease over time and the continued emergence of variants are expected.

“Based on emerging data, Bharat Biotech believes that a third dose may be beneficial to maintain the highest levels of protection,” it said.

ALSO READ: Paracetamol not recommended after being vaccinated with Covaxin: Bharat Biotech

The study results come at a time when the government is about to allow the most vulnerable population groups to avail a third Covid19 jab but with a caveat of having completed nine months since the administration of their second doses.

The research has meanwhile shown similar increases in neutralizing antibodies against Alpha, Beta, Delta plus were observed after analysing comparison between 184 previously vaccinated individuals who either received a third dose of Covaxin or placebo.

The findings are now part of a pre-print titled “Persistence of immunity and impact of a third (booster) dose of an inactivated SARS-CoV2 vaccine, BBV152; a phase 2, double-blind, randomised controlled trial” that has been released on the preprint repository of medical science, MedRXiv.

It also depicted that the booster dose led to a pronounced increase in CD4+ T- and CD8+ Tcell response (types of T cells, an important arm of immunity) which may allow Covaxin to confer long-term protective efficacy against severe SARS-CoV-2.

Importantly, the frequency of adverse events was lower than vaccines from other manufacturing platforms, said the study adding that durable neutralising, T and B cell responses were detected six months after vaccinations which suggests good immune memory responses and long-term protection from severe disease.

Also, 90% of recipients had a detectable neutralizing antibody response against the wild – type strain six months after the second dose.

The company also said in the statement that neutralizing antibodies against homologous and heterologous SARS-CoV-2 variants increased from 19- to 265- fold after a third vaccination.

“These trial results provide a strong foundation towards our goal to provide Covaxin as a booster dose,” said Krishna Ella, Chairman and Managing Director of Bharat Biotech.