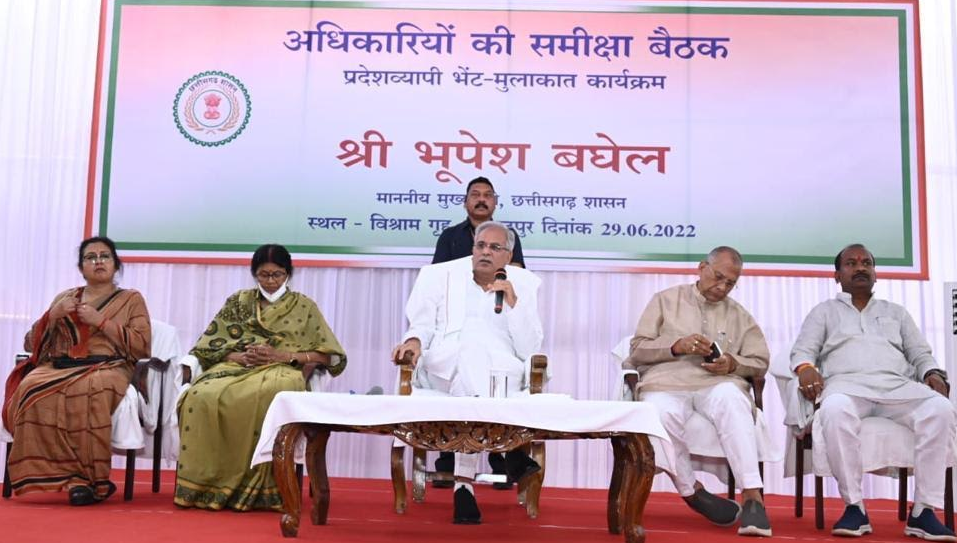 Chief Minister Bhupesh Baghel, in a review meeting held at Circuit House in Baikunthpur today, said that the work of the beneficiaries should be done easily in government offices. For this a positive atmosphere should be created in the offices. Ensure the presence of Anganwadi workers, teachers, caste certificate work should be done regularly. Sub-castes should also get certificates. Ensure that the bonus and remuneration distribution of tendu leaves are done expeditiously, the cases of compensation for compensation in wild animal attack should not be pending. The Chief Minister reviewed the progress and implementation of government schemes and works related to general public in a meeting held with district officials. Home Minister Shri Tamradhwaj Sahu, MP Smt. Jyotsna Charandas Mahant, Parliamentary Secretary Smt. Ambika Singhdeo and MLA Shri Gulab Kamro and Additional Chief Secretary to Chief Minister Shri Subrata Sahu were also present on the occasion. The Chief Minister said in the meeting that officers-employees are integral to the governance system. are organs. It has been decided by the state government to implement the old pension scheme, so that the future of the officers and employees is ensured. Praising the officers, he said that yesterday’s feedback is very good during the visit. You all are doing a great job, keep up the good work like this. The forest rights letter has done a good job. The development of the individual is at the center of our policies and actions. The Chief Minister said that the officers should maintain communication with the general public during departmental visits. Run an awareness campaign telling the types and eligibility of ration card. Make sure to have the names of all the family members in the ration card, no member is left out, the woman in Bahrasi had complained about not registering her name. Provide electrical connections where possible. The officers of CREDA should promote the work of solar lights. Ensure 100% implementation of Half Electricity Bill Scheme. He said that those people whose temporary caste certificates have been made, they should be issued permanent caste certificates within a time-limit, provide certificates to the legal heirs, by running a campaign in the school, caste certificates to the students of classes above VIII. Make sure to provide 100%. During the review of revenue cases, the Chief Minister said that the Gram Sabha already has the right to distribute undisputed transfers, there should not be any dilemma in this regard. Keep doing better work. Along with Atmanand School, other schools should also run well. Haat Bazar clinics have done good work in the district. He asked the officials to give wide publicity to the Haat Bazar Clinic. The Chief Minister said that the income of the people should increase. The government is committed to this. He said that the trend towards agriculture has increased, the area and number of farmers has increased, the income of the people is increasing in agriculture. There should be an increase in the income of the people from minor forest produce and forest medicines, there should be a forest medicine processing center. With the formation of a drug processing center, people will get more price and migration will stop. The village has all the necessary things. The demand for pure and natural things has increased. Work should be done in the direction of earning revenue, there is a need to work together. Like this:Like Loading… Continue Reading