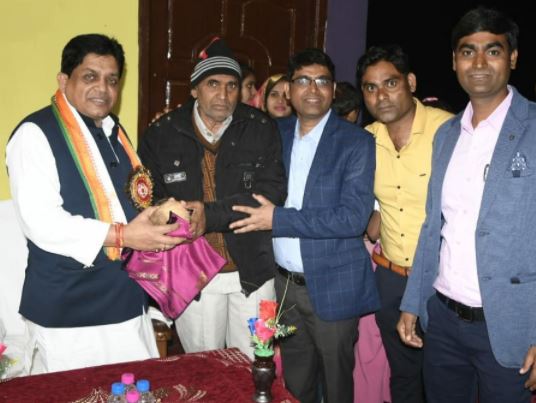 Dr. Shivkumar Dahria participated in the inauguration program of Madai Mela and development works organized at Village Borid of Arang Vikas Block. On this occasion, he said that work is being done to save the culture of Chhattisgarh through Madai Mela. The state government is also working to save the culture and tradition of Chhattisgarh. With the promotion of Chhattisgarhi culture, a government holiday has been started in Teej festivals here. Local people are also being given opportunities in jobs. He said that the Madai Mela is a festival of happiness in the village. The people of the village celebrate this fair by organizing it among themselves. This kind of event should be held in the village and wish you all to live in peace and harmony peacefully.
Minister Dr. Dahria inaugurated the additional hall and other works of Shala Bhawan in Borid. He also announced to give funds for the construction of CC Road, compound in the village. In the meeting of Borid, he said that our farmers are the foundation and economy of this state and country. If the farmers are strong then the village and the state will be strong, the country will be strong. Therefore, the government first started paddy procurement at a support price of Rs 2500 per quintal with the debt waiver of all farmers. The state of Chhattisgarh is the first government in the country to purchase paddy at the highest support price. He said that paddy will be purchased at the same price in the coming time and whatever difference amount will be paid to the farmers through Rajiv Gandhi Kisan Nyay Yojana. Minister Dr. Dahria said that no injustice will be allowed to farmers.
He said that development works are being done in the state under the leadership of the Chief Minister. The electricity bill is also halved. Recruitment of local unemployed has also been started. 24 out of 36 promises have been fulfilled, soon the remaining promises will also be fulfilled. District president Mr. Khilesh Dewangan, sarpanch Mr. Gautam Chandrakar, Komal Sahu and other public representatives were also addressed. During this time Shri Keshari Mohan Sahu, Shri Domendra Sahu, Punni Bai Chandrakar etc. were present.