The work of revival of rivers in the state continues, attention is also being given to conservation of ground water: CM Yogi 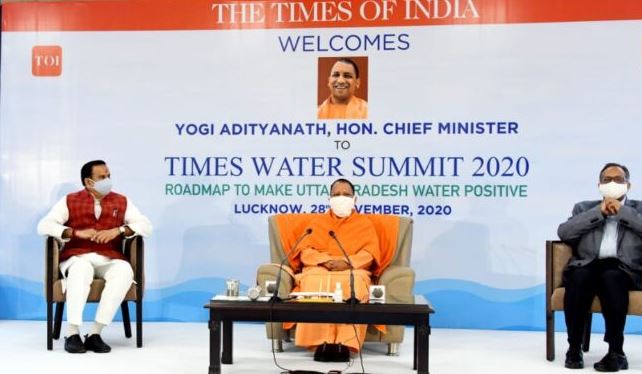 Uttar Pradesh Chief Minister Yogi Adityanath said that water conservation is necessary for the welfare of the people. Water is considered a model of life. Indian manisha has given importance to water. Referring to the references of praising water in the scriptures, he said that our scriptures inspire water conservation. He said that under the leadership and guidance of Prime Minister Narendra Modi, work is being done by the Central and State Governments for conservation and planning of ground water, cleanliness and cleanliness of surface water, ensuring availability of pure drinking water. For this, ‘Atal Ground-Water Scheme’, ‘Namami Gange’ project, ‘Har Ghar Nal’ etc. schemes have been implemented.

CM Yogi was expressing his views at the ‘Times Water Summit -2020’ held at his official residence here today. He said that the awareness campaign of Times Group regarding water crisis and water conservation through Water Summit is a commendable initiative. He said that this campaign is the work of conservation of humanity as well as the creature. The state government will provide full support to the campaign. He said that Uttar Pradesh is a prosperous state in terms of water.

As a result, several rivers including Tamsa, Aami, Manorama, Aril have been revived. He said that along with rivers, attention is also being given to conservation of ponds, ponds and conservation of ground water. For this, along with banning of plastics, the Mati Kala Board was formed to provide alternative clay products instead of plastic products and for the welfare of artisans working in pottery art.

CM Yogi said that the state government has made arrangements that from April to June, the village potter can be removed from the village pond for free. This creates ponds for water conservation during the rains. In addition to free soil, pottery, solar chalk, electric chalk etc. have also been provided. As a result, people are getting cheap and eco-friendly products in place of plastic products. Many similar models have been established in the state. Handpumps that have become unused in Varanasi model are being used by the district administration for water recharging. In Chitrakoot, the rainwater of the roofs of schools and government buildings is being protected by rainwater harvesting through rainwater harvesting. Due to the water crisis, water was transported through tankers in Bundelkhand. For the conservation of ground water and surface water, the state government conducted a massive campaign of plantation every year from 2017 till now. 05 crore in the year 2017, 11 crore in the year 2018, 22 crore in the year 2019, 25 crore in the year 2020. These trees mostly consist of trees like Peepal, Pakad, Mango, Neem, Banyan.

Addressing the summit, Water Power Minister Dr. Mahendra Singh said that continuous work is being done by the state government for water conservation, water recharge, providing water for irrigation to farmers. Many big projects have been completed during the tenure of the present state government. This has irrigated about 3 lakh hectares of land.