The women of the village said they will feed you vegetables The minister smiled and agree :Shivkumar Dahria, 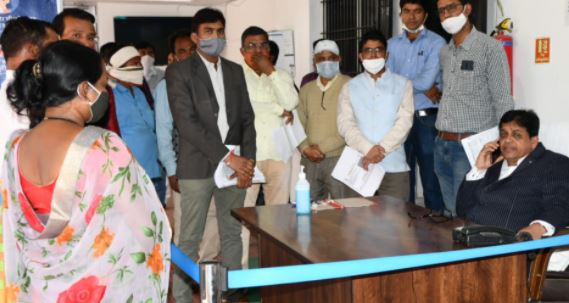 Minister, we work in Gothan. Vegetables are also grown from Bari. Make water arrangements for the fence. Convergence in MNREGA. We will feed you vegetables. Hearing these things of the women of the village, the minister smiled and said, which village do you belong to? Women told of Tekarkunda of Arang development block. The minister said, I often visit my assembly constituency. I meet all the people. I also keep going home. It’s been so many days, why didn’t you meet me around the village? After listening to the minister, the women of the village calmed down for some time, then one said that they were thinking of meeting you for a long time, so today you came to your house. The minister said, if you have come today, then drink tea, eat food and go and feed the vegetable when I come to your village. After saying this, he finally called the sarpanch of the village and the chief executive officer of Arang district and gave instructions to fulfill the demands of the women of the village.

Actually, this matter is about the residence of Dr. Shivkumar Dahria, Urban Administration Minister and MLA of Arang Assembly constituency. By the way, there is a crowd of people who meet Minister Dr. Dahria in his government and private residence every day. After meeting with such a minister, a dozen women of village Tekarkunda of Arang development block reached to meet them. Several women including Rajlakshmi and Unnati self-help group Smt. Rahimat Dhiwar, Smt. Mamta Verma, Shanta Baghel, Sangeeta Verma, Meena Koshale, Ranu Verma, Indrani Verma, informed about the operation of Bari, Gothan and water supply for irrigation in Bari. And sought to connect the women of the village with employment by linking them with MNREGA. During a conversation with the women minister Dr. Dhariya in Chhattisgarhi, the minister asked them to know the situation of the village and their problems. He immediately instructed the sarpanch of the village and the CEs of the district to call and meet the demands of women. He also invited everyone to have tea and eat food. The women of the village were overjoyed at this readiness of Minister Dr. Shivkumar Dahria and asking for food with tea. He said that upon coming to the village, you will feed Bari vegetables.