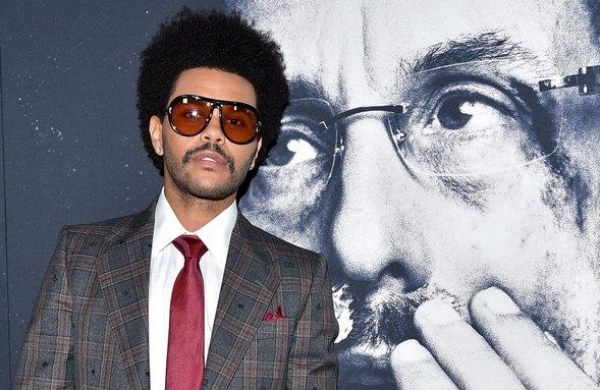 By ANI
WASHINGTON: Singer-songwriter The Weeknd kick-started the 2021 Super Bowl Halftime Show by giving a monumental performance on Sunday.

As per The Hollywood Reporter, the singer hit the stage in Tampa Bay, singing hits including ‘The Hills’, ‘Can’t Feel My Face’, ‘I Feel It Coming’, ‘Save Your Tears’, ‘Earned It’ and ‘Blinding Lights’.

The singer was dressed in a glimmering red blazer, a black button-down shirt with matching trousers. The stage was lit with lights and the stadium sky filled with fireworks as the star performed a medley of hits backed by a choir, violinists, and masked backup dancers.

While fans were anticipating a celebrity guest to take the stage with The Weeknd, the singer stayed true to the promise of his solo act and was not joined by any surprise celebrity performers during the show.

The show kicked off with the singer in a luxury sports car in front of what looked like the Tampa Bay skyline. As the performance began, a floating figure in white, wearing a mask with red glowing eyes, was lowered to the ground as a choir, all of whom were dressed in similar outfits, began singing.

The Weeknd started the show on a high note by performing his insanely popular track ‘Starboy’ before segueing into ‘The Hills’.

In a hall of mirrors-type room, he performed ‘Can’t Feel My Face’, surrounded by several dancers wearing the same red blazer ensemble, but adorning bandages on their faces, keeping in line with the character that The Weeknd has been portraying throughout the past year to promote his much-acclaimed ‘After Hours’ album.

He then performed ‘I Feel It Coming’ and ‘Save Your Tears’ before slowing things down with ‘Earned It’, backed by an orchestra of violinists and backup singers.

For his finale, the singer then went ahead with a show-stopping lively performance of ‘Blinding Lights’, which was accompanied by fireworks.

In other performances, Miley Cyrus took the stage during a tailgate pregame show on Sunday afternoon, before the National Anthem was performed by H.E.R., ‘America the Beautiful’ sung by country artist Eric Church and R&B singer Jazmine Sullivan, and youth poet laureate Amanda Gorman recited a poem.

With the ongoing COVID-19 pandemic still running rampant worldwide, the event, which allowed only 25,000 fans to attend it, had certain safety measures in place. To ensure the safety of the people attending the show, nearly 30,000 cardboard cutouts were placed in a 66,000-seat stadium.

Over the years, many singers have performed at the star-studded show. The Weeknd follows previous performers including Jennifer Lopez and Shakira, Maroon 5, Justin Timberlake, Lady Gaga, Coldplay, Katy Perry, and Bruno Mars.

Earlier this week, it was reported that The Weeknd is planning his ‘After Hours’ tour for January 2022. The tour was rescheduled after being delayed due to COVID-19.