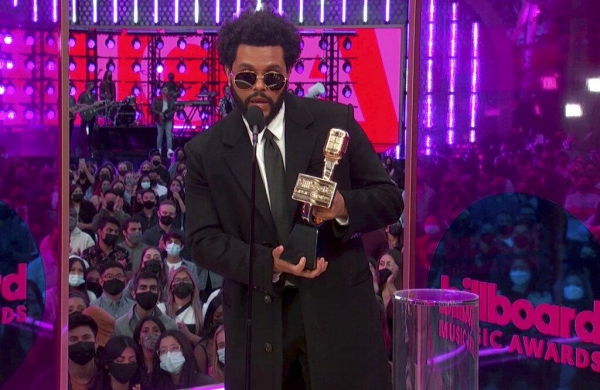 By ANI
WASHINGTON: The Billboard Music Awards celebrated yet another iteration of its beloved show on Sunday, with American singer-songwriter The Weeknd dominating the ceremony with 10 awards, including the climactic top artist trophy, followed by the late Pop Smoke with five, and BTS and Bad Bunny with four apiece.

According to E! News, the finalists were chosen based on their performance on Billboard charts as well as music sales, streaming platform statistics, radio airplay, and social engagement.

The Weeknd, while accepting one of the several awards on camera earlier in the evening promised a change of stylistic pace to come in his future album and performance cycles. He said, “The after hours are done and the dawn is coming.”

At another point, he made a joke after beginning with a slight show-of-religiosity fake-out, “I’d like to thank God… that I don’t have to wear that red suit anymore.”

Last year, Post Malone took home the most awards with nine out of his 16 nominations. This year, Pink was announced as the Billboard Icon award, Trae tha Truth as the Change Maker winner and Drake continued his historic winning streak, as he accepted the Artist of the Decade Award.

While receiving the award he was joined on stage by his son Adonis, his mother and father, and his closest friends to celebrate. Currently, the Canadian rapper holds the title for most Billboard Music Awards wins with 27, and was nominated for an impressive seven more tonight.

Meanwhile, Pink was honoured with the Icon Award, and her daughter Willow made a stunning cameo during her performance. Check out the complete list of winners:

Top Billboard 200 Album: Pop Smoke ‘Shoot for the Stars, Aim for the Moon’

Top Rap Album: Pop Smoke ‘Shoot for the Stars, Aim for the Moon’

Top Rap Album: Pop Smoke ‘Shoot for the Stars, Aim for the Moon’

The 2021 Billboard Music Awards took place in front of a fully vaccinated, fully masked live audience in the plaza outside L.A.’s Microsoft Theatre, with winners emerging from an enclosed backstage area to accept their awards with their backs to the crowd.

As per People magazine, this year’s awards show was based on chart data from March 21, 2020, through April 3, 2021, with winners based on “key fan interactions with music,” including song sales, streaming and social engagement.