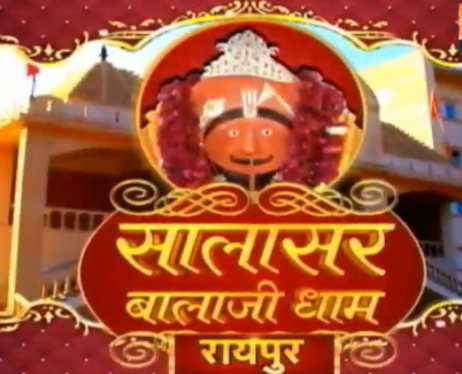 The third anniversary of the temple establishment was celebrated with great pomp in Salasar Balaji Dham, Raipur. Devotees flocked to see God in this one day festival. In the morning, the Lord was made adorned with milk and ceremonies. Aarti was also accompanied by recitation of Sunderkand and Bhajan. Then in the evening life management guru Pandit Vijay Shankar Mehta ji read the story on ‘Hanuman Ji’s Seven Relationships’.
This is Salasar Balaji Dham of Raipur, the first recognized center of central India, where special worship was held on completion of three years of temple establishment. In the morning, after the adornment of Balaji at the Punya Muhurta, milk was performed. After this, the Lord was offered Sawamani Bhoga and Chhappan Bhoga. Salasar Balaji’s aarti was performed from 55 applause. Along with this, Sunderkand was also recited.

Devotees were given Mahaprasadi along with Bhajan Sandhya in the huge pandal built in the Salasar Balaji temple complex. On the eve of the festival, life management guru Pandit Vijay Shankar Mehta ji read the story on ‘Hanuman Ji’s Seven Relationships’. Through the seven characters of Ramayana, he gave a beautiful interpretation of life management and relationships.
A large number of devotees started arriving at the festival of Salasar Balaji Dham from early in the morning. Extensive security arrangements were made here in view of the Corona infection. Suresh Goyal, Chairman of Shri Salasar Balaji Mandir Seva Samiti, expressed gratitude. Number of active patients less than 3 thousand, 6 infected people died today
Regarding this devotional event of Balaji Salasar Dham after the Corona period, the devotees said that it has brought a new positive energy in them.
At the same time, the members of the organizer Agarwal Sabha said that the fame and recognition of Salasar Balaji Dham is continuously increasing. Devotees from other states have also come to see and hear the story.