The status of Tehsil in the pass, Diwali gift from the Chief Minister Mr. Baghel to the residents 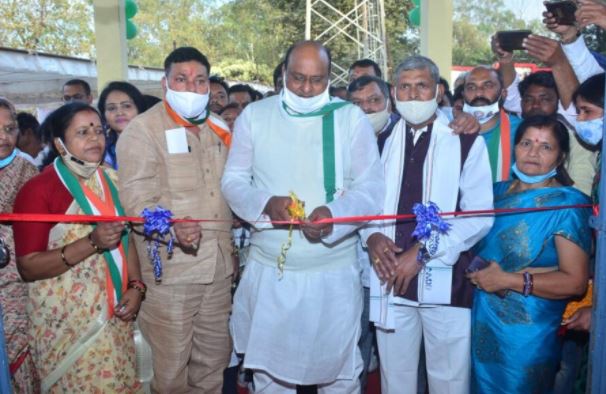 Revenue and Disaster Management Minister Shri Jai Singh Aggarwal inaugurated the newly created Tehsil Pass office in Korba district. On this occasion, he said that the status of Tehsil to Darri is a Diwali gift from the Chief Minister Mr. Bhupesh Baghel to the people here. Shri Aggarwal said that yesterday only the Chief Minister has inaugurated 23 new tehsils across the state and from today the functioning of these tehsils has also started. Shri Aggarwal said that the Chief Minister has given two tehsils of Darri and Hardibazar to Korba district. The Revenue Minister said that this will save both time and money of the people and more and more people will get the benefit of the schemes of the government. Addressing the inauguration ceremony of the tehsil office, Revenue Minister Mr. Aggarwal said that a proposal for the formation of 25 new tehsils was sent to the state government, out of which 23 tehsils have been formed. Shri Aggarwal said that Pasan and Barpali in Korba will also get the status of new tehsils soon. Along with this, two new sub-tehsils will also be set up in Azarbahar and Madanpur area to make the residents of Shyang-Lamru region faster. Shri Aggarwal informed that the state government has also approved building and vehicles for the newly constructed tehsils. The Revenue Minister said that Pali will soon get the gift of SDM office. All formalities for this have been completed at the administrative level and SDM office will also be started in Pali in the coming days.
The Revenue Minister said that even during the Corona period, the state government has fully operationalized its welfare programs and schemes, which have provided many facilities to the people of the state. A medical college in Korba district will also be established soon. The 25 wards facing water problem in the river crossing and the Balgi area will also get relief on the construction of the encyte on the Hasdev river. Mr. Aggarwal informed that approval has also been received for repairing all the dilapidated roads in the municipal corporation area and construction of some new roads soon. Shri Agarwal also thanked the residents of the district for their patience and cooperation in dealing with the Kovid infection. Shri Jaisingh Agrawal wished Deepawali to the citizens. He also distributed blankets to the beneficiaries to avoid the cold under the Sukhad Sahara scheme.
In the program, Mayor of Korba Municipal Corporation, Mr. Rajkishore Prasad, Chairman of Municipal Corporation, Mr. Shyam Sundar Soni, Former Chairman Mr. Durpal Singh Kanwar, Councilor Mr. Surendra Jaiswal, Mr. Shrikant Budhia, Mahesh Bhavani, Mrs. Sapna Chauhan, Mr. J.K. P. Agarwal, Mrs. Kusum Dwivedi and aldermen and corporators of the Municipal Corporation also attended. On behalf of the district administration, ADM Mrs. Priyanka Mahobia, Municipal Corporation commissioner Mr. S. Jayawardhan and other officials were present.