‘The new messiah’: Rakesh Tikait is cynosure of many eyes, not just farmers 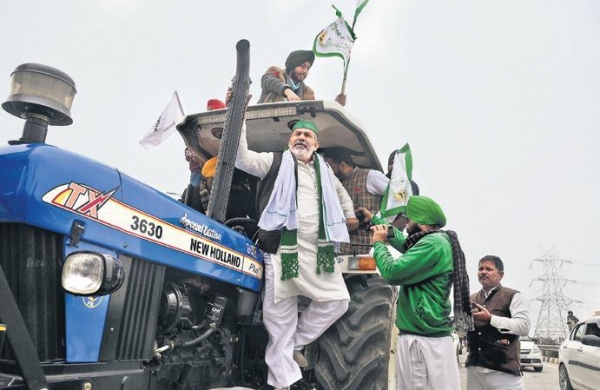 By PTI
NEW DELHI: His tears exercised an emotive pull even he may not have envisaged, helping turn the tide for a movement that seemed to have lost both sheen and momentum after the violence on Republic Day.

It was but a moment in time and Rakesh Tikait was the man in it.

He was once a Delhi Police constable, tried his hand at electoral politics and been a farmer leader for years.

But Bharatiya Kisan Union (BKU) leader Tikait has broken out of the confines of western Uttar Pradesh to find a space in the national spotlight as arguably the most powerful farm leader of the day.

The two-month farmer movement against the Centre’s three farm laws was till now dominated by protesters from the fields of Punjab and Haryana who set up camp at the Singhu and Tikri border points into the city.

Now, the focus has shifted to Ghazipur on the Delhi-Uttar Pradesh border where farmers are gathering in thousands to boost the fight that seemed to have been weakening only two days ago.

A day after the Republic Day violence in Delhi, when a section of farmers taking part in the tractor parade broke through barriers, clashed with police and stormed the Red Fort for a few hours, the farmer game it seemed to be over.

On Wednesday night, the atmosphere was tense at Ghazipur.

The Ghaziabad administration issued an ‘ultimatum’ to the protesters occupying a stretch of the Delhi-Meerut expressway to vacate as the January 26 clashes painted a not-so-peaceful picture of the peasant community.

And then came the Tikait moment.

As security presence at the site escalated and fears grew that the protesters would be forcibly evicted, an emotional Tikait broke down while talking to reporters.

“The protest won’t be called off. Farmers are being met with injustice,” he said and even threatened to end his life for the cause.

It soon emerged that the 51-year-old who was leading BKU supporters at the Ghazipur border since November 28, was no ordinary man at all.

His call for continuing the protest against the government struck a deep emotional chord.

Videos of his emotional outburst were circulated across multiple platforms.

It led to his brother Naresh Tikait calling a ‘mahapanchayat’ at their home town in Muzaffarnagar on Friday where tens of thousands of farmers gathered to back the movement.

The crowd at Ghazipur border that had reduced to 500 on Thursday night grew manifold over the next 12 hours, running into well over 5,000 in next 24 hours.

The farmer movement was not just revived but further energised.

Tikait, who has been part of a delegation talking with the Centre over the ongoing protest, is also one of the accused in the January 26 violence in Delhi that saw one farmer dying when his tractor overturned and hundreds of people, including police personnel, being injured.

He has denied the allegations of conspiracy and demanded a judicial probe into the violence, blaming infiltrators in the tractors’ parade of the unrest.

To be named as an accused by the Delhi Police is perhaps strange for Tikait, who served as a head constable in the force but quit in 1992-93 when he had to deal with a farmers’ agitation led by his father, the legendary Mahendra Singh Tikait.

Born on June 4, 1969 in Sisauli village of Muzaffarnagar district in western Uttar Pradesh, Rakesh Tikait joined BKU after quitting the Delhi Police and gained prominence as a farm leader after the death of his father to cancer in May 2011.

Mahendra Tikait, who was hailed as ‘messiah’ of farmers, had inherited the ‘Chaudhary’ title of the regional Baliyan khap (a social and administrative system in parts of north India) at the age of eight from his father.

Going by the tradition of the khap, the title passed on to his elder son and Rakesh Tikait’s elder brother Naresh.

But Rakesh Tikait, a BA graduate from the Meerut University, was designated national spokesperson of the BKU.

He has two younger brothers — Surendra, who works as a manager in a sugar mill, and Narendra, engaged in agriculture.

The father of three — two daughters and a son — has been at loggerheads with various governments on a range of farmers’ issues, including loan waivers, minimum support price (MSP), power tariff and land acquisition in states such as UP, Haryana Rajasthan, Madhya Pradesh.

He also tried his hand at elections but lost both times.

In 2007, he contested the UP Assembly polls from Khatauli constituency in Muzaffarnagar as an independent candidate.

In 2014, he fought the Lok Sabha election from Amroha district on a Rashtriya Lok Dal (RLD) ticket.

Ahead of the 2014 polls, Tikait had declared assets worth Rs 4.25 crore, including Rs 10 lakh cash, and liabilities of Rs 10.95 lakh with land worth over Rs 3 crore forming the biggest chunk of his assets.

He also declared three criminal cases against him in the election affidavit.

These cases were lodged in Meerut and Muzaffarnagar in Uttar Pradesh, and Anuppur in Madhya Pradesh.

The vocal farmer leader had to spend nights behind the bars for defying public servant’s orders during several of the protests that he has led in the past decade.

Having dug in his heels along with his supporters at the Ghazipur border amid a deadlock with the Centre over the new farm laws, Tikait on Saturday was once again teary eyed.

But this time overwhelmed by emotion as villagers, including children, reached the protest site carrying water, homemade food and buttermilk, after he announced he would drink water only when farmers will bring it since the local administration had barred water tankers at the protest site.

Rakesh Tikait is now the cynosure of many eyes — and it’s not just farmers.