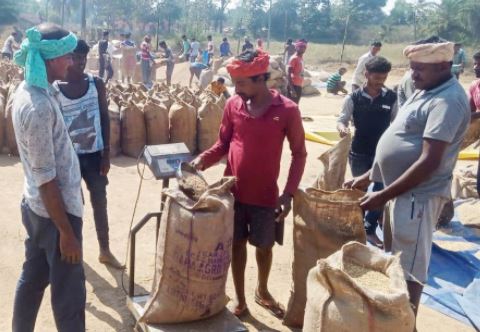 Devsay, a farmer from village Kandadi, selling paddy for the first time on support price, is very happy. He said that the government of Mr. Bhupesh Baghel has given me a lease of forest land, took the paddy crop and registered it with the Koylibeda Cooperative Society to sell it. Before I got the lease of the forest land, I used to sell my paddy to the coaches for a quarter of a price, which I had to bear loss. Due to the lease of forest land by the government, I was registered in the committee to sell paddy and on the very next day after the paddy purchase started, I sold my 145 sacks of paddy at the rate of Rs 25 hundred per quintal for Rs 01 lakh 45 thousand. I thank the Chief Minister Mr. Bhupesh Baghel’s government for this arrangement. His government has benefited me by purchasing my paddy at a support price. It is noteworthy that Devasay father Baisakhu, a farmer of village ‘Kandadi’ in the heavily Naxalite affected Koylibeda development block, has been given a forest lease of 10 acres in Orange-19 on the banks of river Meerki (Forest Authority recognition letter), in which they are farming with their families. Farmer Devasay told that out of the 10 acres of land obtained from the Forest Rights Recognition Card, he had harvested paddy crop on 04 acres, maize on 03 acres and urad, kulthi etc. in 03 acres, presently in about 02 acres of land. Maize crop has been taken.

It is worth mentioning that 174 forest patta farmers have been registered in the Koylibeda Cooperative Society, who will get a chance to sell paddy at the support price. These farmers, who had been in the forest land for years, were deprived of selling paddy at the support price and they had to sell their hard-earned paddy to the Kochis at a flat price, but now it will not happen. This year 1274 farmers of 41 villages of 14 gram panchayats have been registered in the Koylibeda Cooperative Society and they have also been provided with fertilizer, seeds and cash for farming. The registration farmers also include 174 forest lease holders. Of these patta farmers, 134 farmers have been provided fertilizer, seeds and cash by the cooperative society at zero percent interest rate.