The formation of Nagar Panchayat will accelerate the development of Chandkuri region: Minister Dr. Dahria 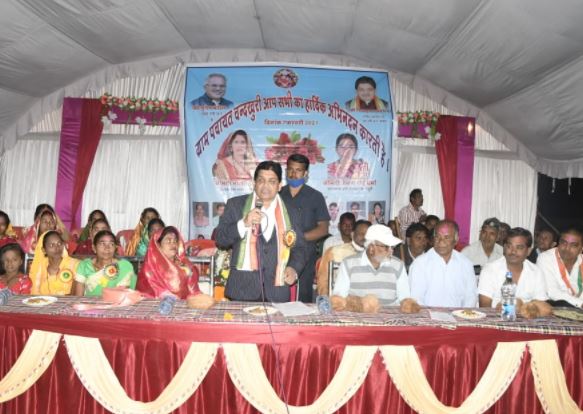 Shivkumar Dahria attended the Madai Mela organized in Chandkuri, the newly formed Nagar Panchayat of Arang Vikas Block. On this occasion, he said that although the identity of the Chandkuri region is already there, now after the formation of the Nagar Panchayat, the identity of the place will increase further. Being the only temple of Mata Kaushalya, the region has historical significance. The region is being developed from the tourism point of view by the government of Chhattisgarh. Minister Dr. Dahria said that Chandkuri has now become a Nagar Panchayat. Development of city panchayat will speed up development work here. The government will make available the amount for the development of the area. The chairman and officers have been posted in Chandkuri for conducting the functions of Nagar Panchayat. On this occasion, the people of Chandkuri gave a warm welcome to the minister Dr. Dhariya. People also thanked the Minister for making Chandkuri as a Nagar Panchayat and expressed his gratitude.

He said that through the Madai Mela, the work of saving the culture of Chhattisgarh is being done by the government. With the promotion of Chhattisgarhi culture, a government holiday has been started in Teej festivals here. Local people are also being given an opportunity in government jobs. He said that the Madai Mela is a festival of happiness in the village. The people of the village celebrate this fair by organizing it among themselves. Such an event should be held in the village and you all wish to live in peace and happiness in the city of Mata Kaushalya.