The development model of Chhattisgarh is being discussed all over the country: Shri Bhupesh Baghel 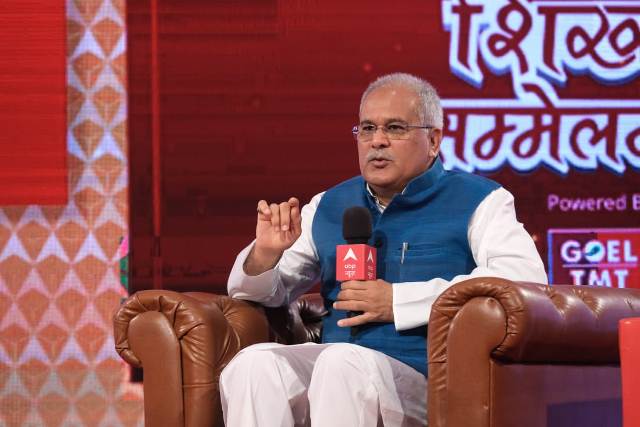 Chief Minister Shri Bhupesh Baghel has said that we have fulfilled the promises made to the people. All sections including tribals, farmers have unwavering trust in the state government. We are working towards making the villages self-reliant. Working to fulfill the dream of our forefathers of prosperous and peaceful Chhattisgarh. Today the Chhattisgarh model of development is being discussed all over the country. The Chief Minister was addressing the summit organized by ABP News at a private hotel in Raipur today. At the beginning of the conference, tributes were paid to the country’s first CDS martyr General Mr. Bipin Rawat, his wife Mrs. Madhulika Rawat and other martyred soldiers. Chief Minister Mr. Bhupesh Baghel said that when he came into politics, he had come thinking that I should serve the people. is to serve. I have to fight for the rights of the people, the people have given me a chance to serve Bharat Mata and Chhattisgarh Mahtari, it is my good fortune. People believed in the government and gave three-fourth majority. After the formation of the government, the first decision of the cabinet was to waive the loan of Rs 9 thousand crore to 11 lakh farmers, the second to buy paddy of Rs 2500 and then to return the land of tribals in Lohandiguda. He said that we have empowered tribals, farmers, women and youth, so today Chhattisgarh model is being discussed across the country. Chief Minister Mr. Baghel said that the central government is not giving money for the rights of Chhattisgarh. About 17 thousand crore rupees were not received from the center in three years. He said that earlier the states used to get 100 percent amount for the central schemes, later it was 90 ratio 10 and 75 ratio 25. Now the 60 ratio received from the center and the state for central schemes has become 40 and 50 ratio has become 50. Pradhan Mantri Awas Yojana has not been discontinued. If the Center gives money, then we will start the work immediately. Houses should be built for the poor. Regarding the resolution of the state government for the next two years, he said that the welfare schemes started including Godhan Nyay Yojana are being successfully implemented, the benefits of which are being given to the people. About 8 lakh quintals of vermi compost was prepared by purchasing cow dung under Godhan Nyay Yojana. Farmers are using it in the fields. Today Vermi compost has become the best alternative of DAP manure in Chhattisgarh. The work of making electricity from cow dung has been started. So far, cow dung has been used for smearing, now paint will also be made from it. The Chief Minister said that it is the endeavor of the state government that the landless people, including the weaker sections of the society, become financially prosperous. Our identity, Chhattisgarh’s symbol Narva, Garwa, Ghuruwa, Bari and our culture should be protected. Today, farmers in Chhattisgarh are not seen burning para, but are donating para for cow. Work has been done to improve education and health services in tribal areas. Hundreds of closed schools were started in Bastar region. Schemes like Haat Bazar Clinic and Mobile Medical Unit were started. Malnutrition has decreased by 32 percent. Malaria Liberation Campaign has led to a significant reduction in malaria cases. He mentioned welfare and innovation schemes like purchase of minor forest produce, half electricity bill scheme, free electricity to farmers, purchase of small plots, 30 percent reduction in land guideline rates. During the Corona period, the government did the work of putting money in people’s pockets through various schemes, due to which the purchasing power of the people increased and there was no effect of recession in Chhattisgarh. Chief Minister Shri Bhupesh Baghel said that Lord Ram is our faith, our culture, our Have an identity. The measurement of paddy is started with the name of Ram. Lord Ram resides in our veins and every particle of Chhattisgarh. Kaushalya Mata is the daughter of Chhattisgarh. Lord Rama spent most of his exile in Chhattisgarh. We have started to develop Ram Van Gaman tourism circuit. The only Kaushalya Mata temple in the country has been beautified. We do not ask for votes in the name of cow, but are working for their protection and promotion. Mr. Baghel said that we have surplus paddy from which permission has been sought from the Center to make ethanol, but till now permission has not been received. He said that gunny bags are not available to buy paddy. The workers of about 500 rice mills in Chhattisgarh have become unemployed due to the decision of the Center to take Usna rice from Chhattisgarh. The meeting has stopped. Mr. Baghel said that now journalists do not ask questions related to Naxalites here. We have given employment in tribal area, increased minor forest produce, increased support price, increased health and education facilities, increased their faith in the government, the work we started has to be successful, Godhan Nyay Yojana, Buying cow dung, 8 lakh tonnes of vermicompost group has been made by women, now making electricity from cow dung, making paint, making the village self-supporting, fulfilling the dream of a prosperous and peaceful Chhattisgarh that the forefathers had dreamed of. Huh. Like this:Like Loading… Continue Reading