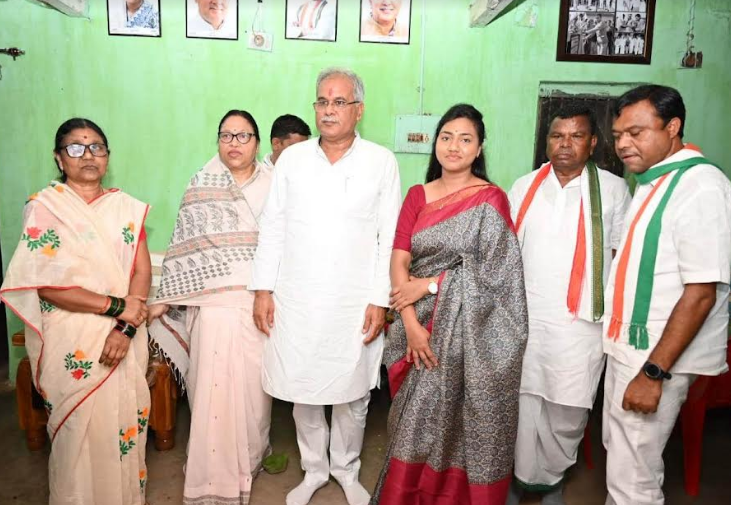 Chief Minister Shri Bhupesh Baghel reached the house of former MP Late Shri Drugpal Shah during a meet-and-greet program at Kutru in Bijapur assembly constituency today and met his family members. Late Shri Drugpal Shah was a big zamindar of Kutru and Bhopalpatnam. He also had a sit-down with the first Prime Minister of India, Pandit Jawaharlal Nehru. The Zamindar family of Kutru was very active in public life. The Chief Minister also saw an old vintage car used for hunting in their place. Mr. Baghel told his family that it was great to meet you. The daughters of the new generation of Late Shri Drugpal Shah are entrepreneurial. One daughter is in farming, one is an air hostess and one is in college. Chief Minister said very good. The Chief Minister heard the memoirs of Late Shri Drugpal Shah related to Pandit Nehru from the family members. Mr. Baghel tasted the fruits of the forest here. This included Tad Kanda, Roasted Mahua, Tilli Mahua. The Chief Minister told the family that I ate a lot of tendu in Surguja, their taste is also great. Relatives of Late Shri Drigpal Shah said that the native chikoo here is also magnificent. It is also worth mentioning that the area of ​​Kutru has also been famous for its rich wildlife. Chhattisgarh has been identified with wild buffalo in the country and Kutru has been its center. In this way have come to meet the residents of an area with a unique cultural and beautiful landscape. There is a festive atmosphere in Kutru on the arrival of the Chief Minister. All the surrounding villagers have reached from far away to meet the Chief Minister. The state government’s schemes have strengthened their economic condition and work is being done in the direction of restoration of cultural identity. Their deities are enshrined in Devgudi. They are shining in new form. The priests have arrived in their costumes to express their gratitude to the Chief Minister. The biggest thing is that along with its old identity, it has also flourished in a new form. Institutional delivery facility is available in remote area like Kutru. New Born Baby Stabilization Facility. All government facilities are present in the campus. Like this:Like Loading… Continue Reading