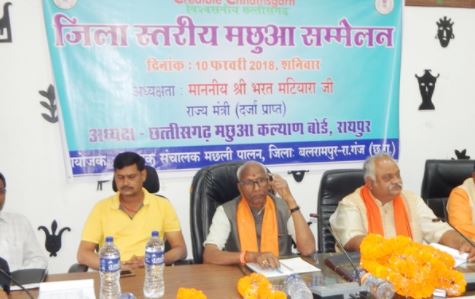 The Chairman of Chhattisgarh Fishermen Welfare Board, who visited Jashpur district on 13 January 2021, A fishermen conference and material distribution program of the beneficiaries was organized in the fishery seed sector Baghima under the chairmanship of Nishad. In the program, the President of the Chhattisgarh Fishermen Welfare Board gave necessary guidance to the fishermen of the district for their welfare and development. discussed. He said that fisheries is a paternal business of fishermen society, fishermen society should get its benefits. He said that the Chhattisgarh government is working to fulfill the policy made in the interest of fishermen and special attention is being given to every person belonging to the fishermen. During this time, Mr. Nishad distributed Mahajal and Ice Box and other materials to the beneficiaries of 2 tribal fishermen cooperative societies and 5 self-help groups in the program. Under the guidance of Collector Shri Mahadev Kavre, fishermen policy being run by the state government is being implemented 100 percent in the district. Due to which the beneficiaries are constantly benefiting. Assistant Director Fisheries Shri D.K. Other officials including fishermen, fisheries department, fishermen cooperative society and group members and villagers were present.