The atmosphere of mutual brotherhood and goodwill is established from the Madai Mela: Minister Dr. Dahria 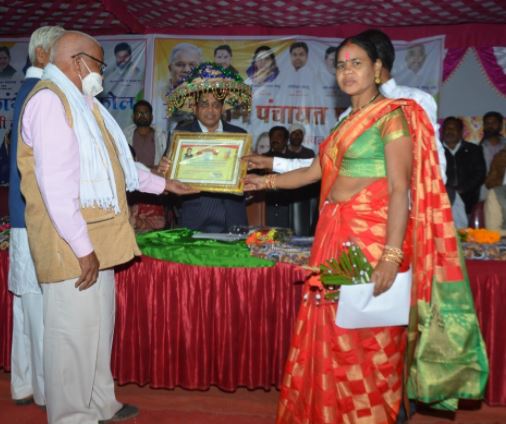 Urban Administration and Development and Labor Minister Dr. Shivkumar Dahria attended the Madai Mela in village Ganaud, Parsakol and Rani Sagar under Arang assembly constituency. While joining the Madai Mela at Village Ranisagar and Parsakhol and Ganaud, Minister Dr Dahria said that work is being done to save the culture of Chhattisgarh through Madai Mela. The state government is also working to save the culture and tradition of Chhattisgarh. With the promotion of Chhattisgarhi culture, a government holiday has been started in Teej festivals here. He said that the Madai Mela is a festival of happiness in the village. The people of the village celebrate this fair by organizing it among themselves. This kind of event should be held in the village and wish you all to live in peace and harmony peacefully. He announced the CC Road and New Panchayat Bhawan at Ranisagar at a cost of Rs 5 lakh and the magnification water supply scheme for house to house taps and drinking water. In Ganaud, he announced Rs 5 lakh for additional room of primary school building and Rs 10 lakh for deep ponding and digging of big pond from MNREGA. During this period District President Mr. Khilesh Dewangan, Chandrashekhar Chandrakar, Mr. Makhan Kurre, Mrs. Hemlata Sahu, Mr. Govind Sahu, Yogendra Yad Sahu, Mrs. Vedmati Bhikham Ratre, Mrs. Keshari Mohan Sahu, Mrs. Bhuneshwari Dageshwar Sahu, Mrs. Devaki Dhruv, Mrs. Kamleshwari Janak Sahu , Mr. Komal Sahu, Kumar Gaurav Chandrakar etc. were present.