That long walk, a year on: UP man offloaded with sick friend fearing virus infection is struggling to make ends meet 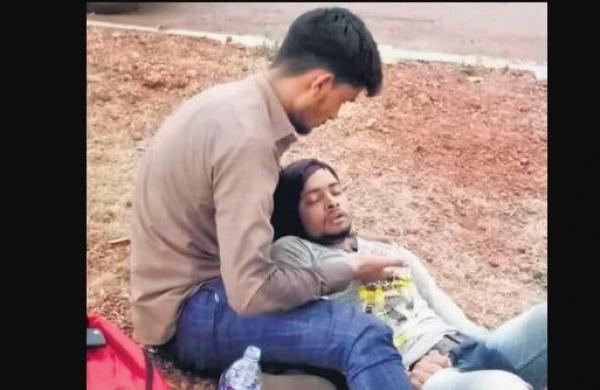 Express News Service
LUCKNOW: Remember the photograph of a man lying unconscious in the lap of a friend frantically trying to revive him which flashed across TV channels last year as desperate labourers returned home from different parts of the country?

It was May 14, 2020. Suffering from fever and breathing problem, Amrit Kumar, 24, was offloaded from a truck he had boarded in Surat in Gujarat to return to his village Deori in Basti district of Uttar Pradesh. He was eventually taken to hospital, but died a day later.

Fearing that he had contracted the deadly coronavirus, fellow travellers dumped him on the road in Shivpuri in MP and moved on, but Amrit’s friend-cum-fellow worker Mohammad Saiyub refused to desert him. Both had paid Rs 4,000 each to get on the truck that was carrying 60 others. “The truck driver asked me to carry on and leave Amrit behind. My conscience did not permit that,” recollects Saiyub. “He did not have Covid. Both of us had tested negative.”

Saiyub returned to Deori with Amrit’s body. His friend was the lone bread winner of his family, which is now struggling to make ends meet. Saiyub is not doing great either, but his family refuses to allow him to go back to Surat. Working at a weaving unit, Amrit and Siayub lost their jobs during the  lockdown. “We lived in the same tenement in Surat. Amrit had helped me during my early days there,” says Saiyub.

Although he wants to, Saiyub is unable to help Amrit’s family due to his meager earnings. Amrit’s old father works on a tiny plot of land. “His father suffers from sciatica and has difficulty walking. His younger brother is a teenager and of the five sisters, only one is married,” says Saiyub. “Amrit’s father works on his land and manages at least one meal per day for his family,” rues Saiyub, who has started a business of making grills and windows. “In Surat, I used to earn Rs 17,000-18,000 a month. Here, Rs 3,000-4,000 is difficult,” says Saiyub.