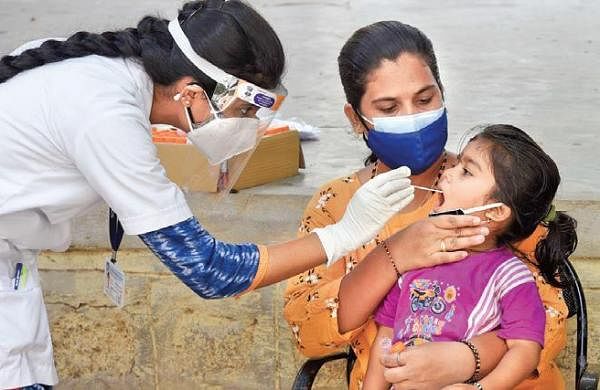 NEW DELHI: As India inches towards a possible third wave of the Covid cases, the country’s top health administrators on Friday wrote to state chief secretaries asking them to get rapid antigen testing booths opened at government and private hospitals in the maximum number possible, doing away with the accreditation criteria.

The estimated national daily molecular testing capacity is more than 20 lakh per day.

The officials wrote that based on the previous experience, it has been observed that if the number of cases rises above a certain threshold, RT-PCR based testing leads to delays in confirming diagnosis due to its turnaround time of about 5-8 hours.

“Therefore, you are encouraged to increase testing by the widespread use of RATs in such specific situations where RT-PCR testing poses a challenge,” said the letter.

The states have been advised to upscale testing for Covid19 in the state by fully utilising the existing molecular testing capacity. In addition, said the letter, the states should expedite procurement of necessary testing equipment and establish BSL-2 laboratory infrastructure from the funds sanctioned to them by the Union health ministry under the emergency Covid19 response plan.

The government said that multiple RAT booths must be set up in identified geographies and operationalised on a 24X7 basis to offer widespread testing and easier access to people.

“RATs may be allowed at government and private healthcare facilities including all hospitals, dispensaries nursing homes, clinics, district hospitals, primary health centres. No accreditation is required for undertaking RAT by any healthcare facility,” said the letter.

It also said that the use of self or home tests may be encouraged for symptomatic individuals adding that PPP models may be explored to establish innovative and convenient testing centres to augment testing in an expeditious way.

In India so far, 7 such home tests have been approved.

The letter says that during the current upsurge, any individual presenting with fever with or without cough, headache, sore throat, breathlessness, bodyache, the recent loss of smell or taste, fatigue and diarrhoea should be considered a suspected Covid19 patient and must be tested.