Terrorists try to repeat attack like Pulwama in Jammu and Kashmir, grenade thrown on army vehicle explodes on road 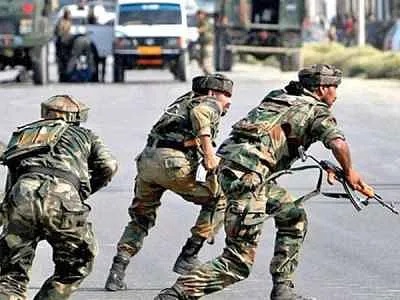 Jammu Kashmir: A terrorist attack took place in Baramulla in Jammu and Kashmir on Monday. In Baramulla, terrorists attacked the Indian Army vehicle by throwing grenades on Monday. However, the grenade failed to hit the vehicle and fell on the road and exploded. 6 people have been injured in this attack. The injured are undergoing treatment at a local hospital in Baramulla.

According to news agency ANI, six civilians were injured in grenade attack due to falling on the road. Jammu and Kashmir police said, “A grenade exploded on the road, injuring six civilians present at the scene. The Pulwama attack was also targeted by the security forces.” More than 40 soldiers of the Indian Army were killed in this attack.

Significantly, in many areas of the valley, the army is continuously killing terrorists. Explain that in an encounter in Jammu and Kashmir’s Pulwama district on Saturday, three terrorists were killed and an army soldier was martyred. Earlier, four militants were killed in an encounter with security forces on Friday in Shopian district of Jammu and Kashmir, while one surrendered. Among the terrorists killed was a former policeman. Shakur Parre, one of the slain terrorists, was a former J&K policeman and district commander of the al-Badr organization. Another terrorist was also involved in the killing of a panch. Weapons and cartridges were recovered from the spot who were killed in the mutt.