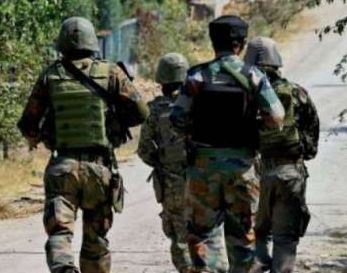 Militants have ambushed the Army’s Quick Reaction Team (QRT) in Aban Shah HMT Chowk on the outskirts of Srinagar district of central Kashmir. Two army soldiers were killed in this attack. The attackers were riding in a Maruti car and their number is said to be three. Immediately after the attack, the terrorists escaped from the scene with a car. While absconding, terrorists have also taken away an AK-47 rifle of the injured jawan. Security forces have launched a campaign to search for terrorists.

Two of the three terrorists in the vehicle had weapons, while the third was driving the car. Two foreign terrorists are being reported. All information in this regard will be gathered by evening. He also told that the martyred soldiers are being told of the Army’s Kilo Force.

According to the information received from the police, the attack was done in the afternoon. When Aban Shah reached HMT Chowk, the army’s QRT team got down from the vehicle and started going towards the shop in front. The terrorists already in the Maruti car started firing on the soldiers. The young man also got some bullets, so he was close to the shop. This sudden attack by the terrorists did not even allow the security forces to recover. Two army personnel were seriously injured in this shootout. Before the soldiers responded to this attack of terrorists, the terrorists riding in the car escaped from there by firing bullets.

The terrorists in the car also took away the AK-47 rifle of the security personnel who fell near the shop during this time. At the same time, other soldiers immediately took care of their injured colleagues and took them to the military hospital. Doctors started the treatment of the injured soldiers that both the soldiers were martyred due to not being able to bear the wounds. At present, his identity has not been revealed.