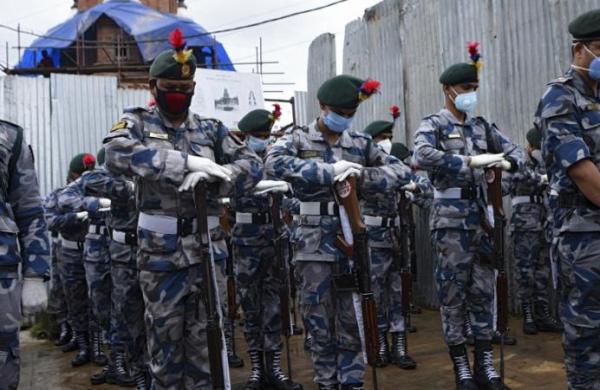 The victim, identified as Govinda Singh, had crossed over to Nepal with his friends Gurmej Singh, Pappu Singh and Resham Singh allegedly for shopping on Thursday. All were residents of Raghav Puri village situated on border in Pilibhit. On their return, they had an altercation with Nepal Police jawans who opened fire killing Govinda on the spot and causing a bullet injury to Gurmej. They alsotook Govinda’s body along with them.

Three others – Gurmej, Pappu and Resham – tried to escape the firepower of Nepal police but one of them, Gurmej, received a bullet on his chest.

Subsequently, both Pappu and Resham made Gurmej sit in between them on the mobike parked on the Indian side and narrated the incident to the SSB jawans deployed at the border before rushing Gurmej to a hospital in Palia in adjoining Lakhimpur Kheri district, 28 km from Pilibhit. Later Gurmej was shifted to KGMU in Lucknow in a critical condition.

Meanwhile, tension prevailed on the border when irate residents in Indian side threatened to take revenge. The villagers claimed that all four had gone to work in the field on the other side and the Nepal police chased them for no fault. It is a usual practice on Indo-Nepal border that residents of both the countries cross over to each other’s territory to work in fields, shop, study or even to vote.

In fact, under the impact of the pandemic, the Indo-Nepal border has been lying closed since March last year. However, villagers continue to cross over stealthily.

Pilibhit has around 52-km porous border with neighbouring Nepal guarded by Seema Surakhsha Bal (SSB) round the clock. Nepalis usually cross over to India to work as farm labourers.

As per the sources, after the incident, the Nepal Police took Govinda’s body to the government hospital in Belauri which is around five km away from border in the Nepal side. The Nepal police claimed it to be an encounter killing.

However, Pilibhit District Magistrate Pulkit Khare and SP Jai Prakash are camping in the area along with heavy force to monitor the situation.

Tension escalated further when the Indian side spotted Nepal Army patrolling the border. The ADG Zone Avinash Chandra rushed to the border on learning about the prevailing tension. The district administration has sent a report on the incident and situation prevailing to the External Affairs ministry.

After intervention by the External Affairs ministry, a meeting of senior officers from both sides took place at the border to reduce tension on Friday.

Following the high level talks between senior officers of the two sides, Nepal Police agreed to hand over the body of Govinda to the SSB at Gaurifanta, the international border between the two countries.