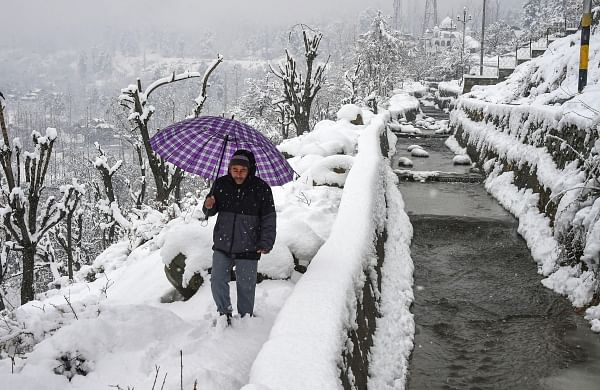 SRINAGAR: The night temperature rose across Kashmir valley as Srinagar saw the minimum settle above freezing point for the first time in more than a week on Wednesday, officials said.

The valley had been experiencing sub-zero nights for the past week, setting in chilly winter conditions earlier than usual, MET officials said.

The officials said Pahalgam, which serves as the base camp for the annual Amarnath yatra, recorded a low of minus 2 degrees Celsius.

Pahalgam was the coldest recorded place in Kashmir.

The mercury in Kupwara in north Kashmir settled at a low of minus 0.3 degrees Celsius.

Qazigund, the gateway town to the valley, recorded minus 0.6 degrees Celsius, while as Kokernag, also in south, registered a low of minus 0.1 degrees Celsius.

The MET Office has said the weather will most likely remain dry but cold till the end of this month.

However, there is possibility — 40 to 50 per cent chance — of light snowfall over extreme north Kashmir parts on November 25, it said.

The wintry conditions in Kashmir have set-in much ahead of the beginning of extreme harsh weather conditions which usually start around the third week of December.

‘Chillai Kalan’, the 40-day period of harsh winter in Kashmir, begins on December 21 every year.