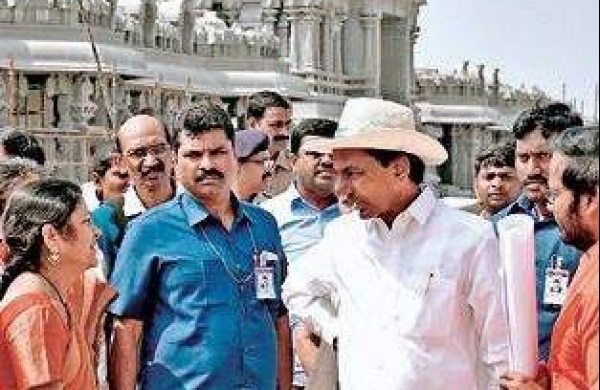 By Express News Service
HYDERABAD: Following the directions of Chief Minister K Chandrashekhar Rao, the Roads and Buildings Minister Vemula Prashanth Reddy on Sunday held a review meeting with the officials concerned at his camp office here in Hyderabad. The Minister asked the officials to prepare a daily worksheet, and held a weekly review meeting to complete the works in time.

The Minister has directed the Yadadri Bhuvanagiri district collector Anita Ramachandran over the phone to expedite the land acquisition for Yadadri Ring Road within January. The State government has proposal to construct the Yadadri Ring Road with Rs 143 crores. He instructed the officials to complete the construction works of the presidential suite and all the 13 VVIP villas in January.

In a press release, Prashanth Reddy said, “Chief Minister K Chandrashekar Rao is making Yadadri temple as a world-renowned shrine, and according to his ideas, the structures should be built in such a way as to bring spirituality to the surroundings of the temple. A pleasant environment with lush green trees and saplings should be developed in the temple town.”

Udaipur murder is an act of terror: Asaduddin Owaisi