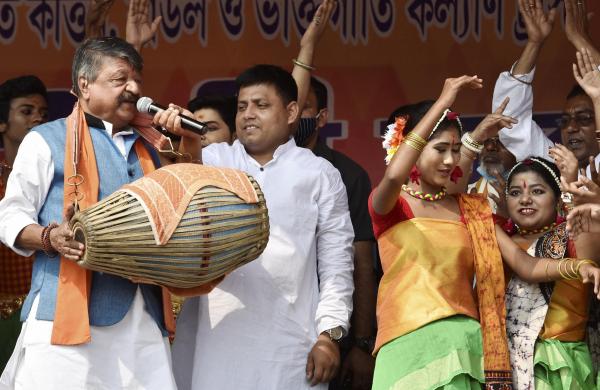 By ANI
KOLKATA: Bharatiya Janata Party (BJP) national general secretary Kailash Vijayvargiya on Tuesday said that Rashtriya Janata Dal (RJD) leader Tejashwi Yadav will not make any difference in the West Bengal Assembly polls because people will vote for BJP due to their faith in Prime Minister Narendra Modi.

This comes a day after Yadav promised to give his full support to West Bengal Chief Minister Mamata Banerjee in the coming assembly polls in the state.

“Before the 2019 Lok Sabha polls, Mamata Banerjee projected herself as Prime Ministerial candidate by calling leaders from all parties on a stage in Kolkata. Inspite of this, the people of Bengal did not vote for her. Tejashwi Yadav or anybody will not make any difference in West Bengal polls because people have faith in Narendra Modi and want a government under his leadership,” Vijayvargiya told ANI here.

The BJP made deep inroads in the state in the 2019 Lok Sabha elections winning 18 seats and reducing TMC’s tally to 22. Out of the total 42 Lok Sabha constituencies in West Bengal, Congress won two seats, the Left drew a blank.

When asked about the infighting between Congress leaders over the party’s alliance with Furfura Sharif’s Indian Secular Front (ISF), Vijayvargiya said, “I don’t want to comment on Congress’ infighting. It is their own fight. Relations don’t get stronger when there is a fight for selfish needs.”

“An alliance based on greed doesn’t last long. It’s alarming that Congress, CPM and TMC are going to any length for appeasement politics. They are getting exposed in the process,” he added.

“BJP is going among the masses with the message of ‘sabka saath, saabka vikas’. Narendra Modi’s upcoming rally will be the biggest rally in the history of West Bengal,” he said.

This will be PM Modi’s first rally in West Bengal post the announcement of election dates by the Election Commission of India (ECI).

Meanwhile, BJP Rajya Sabha MP Swapan Dasgupta along with other BJP leaders met the Election Commission seeking clarification on the status of administrators of 124 municipalities and 477 corporations “whose term has ended but most of them are being run by administrators, who are not actually administrators but political appointees. They are still continuing.”

“Does the model code of conduct apply to them? We believe it does and must be adhered to by them. We demanded that these so-called administrators must be replaced by people who are answerable to the government. These people are not accountable to the government. Various ward offices in the municipal and corporations are being run as political parties offices. We urge the commission to ensure that this does not happen,” Dasgupta said.

West Bengal Assembly elections will be held in eight phases starting from March 27 with the final round of voting taking place on April 29. Counting of votes will take place on May 2.