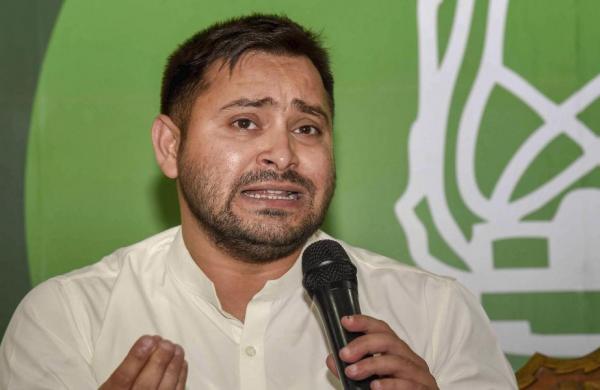 However, he committed a goof-up by posting photograph of Anugrah Narayan Sinha in place of “Shri Babu. Anugraha Narayan Sinha known as ‘Bihar Vibhuti’ had served as a prominent minister in Dr Sri Krishna Singh’s first cabinet after Independence.

NDA constituents-JDU, BJP and HAMS latched on the issue to attack Lalu Prasad’s younger son. RJD sought to downplay the matter, saying it was a “technical error” which the opponent should not make an issue and go by the spirit of the tweet.

Hindustani Awam Morcha (HAM) national president and former Bihar CM Jitan Ram Manjhi took a jibe at Tejashwis knowledge about leaders of Bihar, saying “those who do not recognise as who the late Sri Krishna Singh was, now reckons himself as a leader of Bihar.

“@yadavtejashwi babu, if you dont know (recognize) Bihar Vibhutis (legends), then I would send pictures of all these personalities. See photos before making any comments from now onwards. This boy has made a fun of himself,” Manjhi said in his tweet.

JDU spokesman and MLC Neeraj Kumar questioned Tejashwis knowledge asking, “whether it reflects his hate for knowledge or societal hate as he has posted picture of late Anugrah Babu on the death anniversary of Dr Sri Krishna Singh. “How political tourists will know the great leaders of Bihar. You are corrupt and only know the criminals lodged in jail,” JD(U) leader wryly said.

BJP too derided Tejashwi, the leader of opposition in Bihar assembly, for his goof-up. “The leader of opposition should exhibit his political- social hatred after first getting himself acquainted with the pictures of Bihar Kesri late Sri Krishna Singh and Bihar Vibhuti late Anugrah Narayan Singh,” state BJP spokesman Arvind Kumar Singh said.

Downplaying the issue, RJD spokesman Mrityunjay Tiwary told PTI that “Tejashwi Yadav jee does not himself put up tweets. Its a technical error. The opponents should not make it an issue, rather they should try to understand the spirit behind the tweet.”