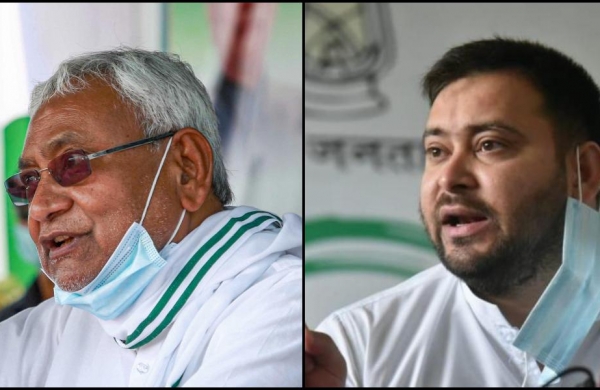 Express News Service
PATNA: Lashing out at the NDA government over an unprecedented rise in crimes in Bihar, Tejashwi Yadav slammed the deteriorating law and order system in the state and dubbed Nitish Kumar as the ‘selected and nominated Chief Minister of BJP’ on Wednesday.

“Bihar has gone into the wrong hands. Goons have a field day and ruling the roots while CM Nitish Kumar wastes his entire energy in editing and hushing up the news of the crime in the media,” Yadav said.

Interacting with media persons a day after the murder of Patna–based station head of Indigo airlines, Rupesh K Singh, Yadav said that Singh was killed merely two kilometers away from the CM’s residence.

“Murder, robbery, extortion, rape, and corruption cases have gone out of control but CM Nitish Kumar does not even like to speak to the kin of the victims. Where is PM Narendra Modi now? Why doesn’t he reply as to who is the ‘Maharaja of Mahajangalraj’? Now, only goons are running the government,” he said.

Yadav also added that Kumar was made the CM “under pressure” and asked him to step away from the Home Department if he cannot manage it effectively.

He also mocked Nitish Kumar by stating that no district in the state was bereft of crimes and that the situation would differ drastically if the government took requisite actions to curb it.

Meanwhile, no breakthrough was achieved a day after the killing of the Indigo airlines employee, although ADG (HQ) Jitendra Kumar told the media a special investigation team (SIT) has been formed to crack the case.

CM Nitish Kumar also expressed his condolences and assured of speedy arrest and trial of the accused.

“Not a single case of crime can be tolerated and police must deal the criminals with strong hands,” Kumar said.

According to official figures, over 17,000 persons were killed between 2015 to 2020 while more than 7,000 rape cases have been lodged during the same period in the state.

ALSO WATCH | Bihar Elections Explained: Why Tejashwi Yadav’s RJD got maximum votes but not the CM-seat

As per another official figure, 252 people were kidnapped for ransom in the last five years while 27 cases of bank robbery were registered as well.