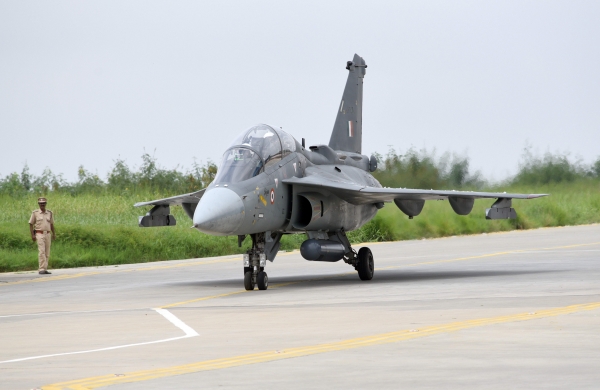 By PTI
NEW DELHI: A more potent version of the indigenous Tejas multirole combat jet featuring a much powerful engine, greater load carrying capability, next-generation electronic warfare system and an array of superior avionics is expected to be rolled out next year and its first high-speed trials will start in 2023, Chairman and Managing Director of Hindustan Aeronautics Ltd R Madhavan has said.

He said the structural package and other work on the Tejas Mark II is progressing well and its production is likely to start somewhere around 2025.

With increase in range and payload capability, Madhavan said the new variant will be much superior than Tejas Mark-IA, 73 of which are being procured by the Indian Air Force from the HAL under a Rs 48,000 crore deal that was approved by the government on January 13.

“Tejas Mark II is likely to roll out by August-September of 2022 after that the first flight will take some time. The first high-speed trial of the jet will start in 2023 and we expect the production to start somewhere around 2025,” Madhavan told PTI.

Asked about the weapon package for Tejas Mark II, Madhavan did not give a direct reply and said it will be decided at a later stage depending on requirement and changing dynamics.

Tejas is a single engine and highly agile multi-role supersonic fighter manufactured by the state-run HAL.

The aircraft is a potent platform for air combat and offensive air support with reconnaissance and anti-ship operations as its secondary roles.

On the next generation advanced multi-role combat aircraft (AMCA) project, the HAL chairman and managing director said the aim was to implement the project under the framework of a special purpose vehicle also involving private sector players.

India is working on the fifth-generation medium weight deep penetration fighter jet and the project is estimated to cost around USD 5 billion.

Madhavan said the prototype of the aircraft is likely to be ready by 2026 and its production could start by 2030.

He added that the Defence Research and Development Organisation (DRDO) was working on the timelines for the project.

“It is still in the initial design stage. We are trying to get into a SPV route where HAL and DRDO will be partners and we will try to bring in some private players, at least two. We want them (private players) to have a slight majority (stakes) so that it does not become a government entity,” he said.

Madhavan said the thinking has been that the private players could hold 50.5 per cent stakes in the venture so that it is deemed as private though there will be provisions for audit by the Comptroller and Auditor General (CAG).

“What we are planning to do is to get the prototypes made by the HAL without going to any SPV route. Once we do that, then we will ask them (private players) to join hands. They will have to put in at least Rs 2,500 crore. We will put in Rs 2,500 crore as initial investment,” he said.

Madhavan suggested that the implementation of the project under the SPV route will cut procedural delays.

The HAL chairman and managing director said the Rs 48,000 crore Tejas project will significantly boost the aerospace sector in India and it will have ripple effects on implementation of various ambitious programmes.

Madhavan said that Tejas Mark 1A jet has superior performance levels compared to China’s JF-17 combat aircraft as it has better engine, radar system, electronic warfare suit besides having edge on the overall technology.