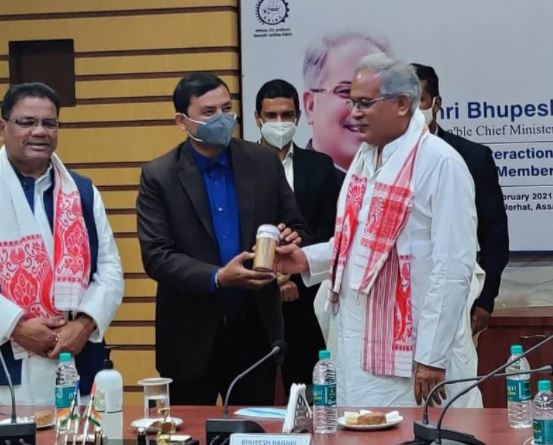 Bhupesh Baghel met a delegation of Assam’s industrialists in Jorhat on the second day of his two-day visit to Assam today. He explained in detail the characteristics of Chhattisgarh with tea cultivation and bamboo and small forest produce based industries here. During the discussion, he invited these industrialists to set up tea and bamboo industries in Chhattisgarh. Representatives from various industries were present on this occasion along with tea producers. A delegation of industrialists from Assam also presented special hand-crafted tea to the Chief Minister.

44 percent of the forest is in Chhattisgarh. There is a large amount of hypnosis. At present, 52 minor products have been brought under the support price. In order to increase the income of forest dwellers in the state and to provide them continuous employment, the processing and value addition of micronutrients is being promoted. He said that Chhattisgarh is famous all over the country for paddy production. Sugarcane crop is also being taken on a large scale here. Now fruits and horticultural crops are also taken on a large scale in the state, their processing industries have immense possibilities here. The weather of Jashpur district is favorable for tea cultivation, tea plantation is being promoted there. He informed the industrialists of Assam about the possibilities of tea industry and invited them to invest in these areas.
Giving detailed information about the possibilities of setting up industries in horticulture and agriculture sector, the Chief Minister said that tomato is widely grown in many regions of Chhattisgarh. The tomato here goes to Pakistan. Bamboo is also being produced on a large scale in forest areas. The forest dwellers are being given employment through all these. In the field of bamboo crafts too, the industrialists here can set up industries by adding value. He said that various artistic objects are also prepared in Chhattisgarh. Bastar art is preferred here and abroad. Various crafts of the state are being encouraged. These craftsmen are also being encouraged to provide markets and value editions as per the time.