Taylor Swift to go on trial over copyright: Court reverses earlier decision on plagiarized lines in Shake It Off 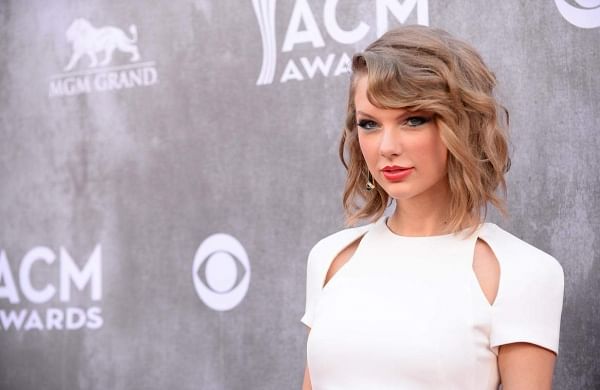 Taylor Swift will be forced to defend herself against copyright claims in front of a jury after a federal judge ruled the lawsuit will go to trial.

Swift, 31, is being sued by songwriters Sean Hall and Nathan Butler, who claim that her 2014 hit Shake It Off lifted lines from their 2001 song Playas Gon’ Play, which was performed by the girl group 3LW.

The case was previously dismissed by the judge, but the successful appeal means the songwriters will get to make their case in court.

U.S. District Judge Michael W. Fitzgerald allowed the case to go to trial after determining that a jury could find that she had plagiarized the lines.

The lines ‘players gonna play’ and ‘haters gonna hate’ are featured in similar versions of each song.

He previously had determined that the similar lines were too ‘banal’ to count as copyright infringement.

He listed 13 songs from past decades, including Fleetwood Mac’s Dreams and The Notorious B.I.G.’s Playa Hater, that included similar lines to back up his contention.

‘The concept of actors acting in accordance with their essential nature is not at all creative; it is banal,’ he wrote. ‘In sum, the lyrics at issue… are too brief, unoriginal, and uncreative to warrant protection under the Copyright Act.’

Hall and Butler — who wrote Playas Gon’ Play, with Hall also producing — originally filed their lawsuit in 2017, and after it was dismissed they filed an appeal requesting a jury trial and damages.

In 2019, a federal appeals court reversed the original decision, ruling that Fitzgerald should not have dismissed it, and the case was sent back to him.

This time, he refused Swift’s request for a summary judgment, a ruling that she had not infringed on the songwriters’ copyright.

‘Even though there are some noticeable differences between the works, there are also significant similarities in word usage and sequence/structure,’ Fitzgerald wrote in his opinion, according to Billboard. ‘Although Defendants’ experts strongly refute the implication that there are substantial similarities, the Court is not inclined to overly credit their opinions here.’

He added that ‘the court cannot presently determine that no reasonable juror could find substantial similarity of lyrical phrasing, word arrangement, or poetic structure between the two works.’

Representatives for the Folklore singer haven’t yet issued a statement, but an attorney for Hall and Butler said the court ‘did the right thing.’

‘Our clients are finally moving closer to the justice they so richly deserve,’ said their attorney Marina Bogorad. ‘The opinion … is especially gratifying to them because it reinforces the idea that their creativity and unique expression cannot be misappropriated without any retribution.’

Although Swift will now have to go to trial for the lawsuit, the judge hasn’t yet set a court date.

The group 3LW was formed in 1999 with Adrienne Bailon, Kiely Williams and Naturi Naughton, with Jessica Benson stepping in for Naughton after her 2002 departure from the group.

But the track’s success was nothing compared to Swift’s monster hit Shake It Off, which topped the Hot 100 and several other music charts after its 2014 release.

The song, which was co-written by Swift with producers Max Martin and Shellback (Karl Johan Schuster), was the lead single from her blockbuster studio album 1989.

The album completed her transition from being a popular country start to a mega-selling pop icon with its other number-one singles: Blank Space and Bad Blood.

According to Billboard, Shake It Off is Swift’s best-selling single to date.

Swift has weathered previous lawsuits over her song, including a 2015 suit from songwriter Jessie Braham, who contended that she had plagiarized from his 2013 song Haters Gonna Hate, though the case was dismissed.

The songstress was on the other side of the equation with Olivia Rodrigo’s smash-hit album Sour, which was released in May.

The actress and singer proactively listed Swift as a co-writer on her song Deja Vu because of the similarities it had to her 2019 song Cruel Summer, though Swift had no involvement in crafting Rodrigo’s song.