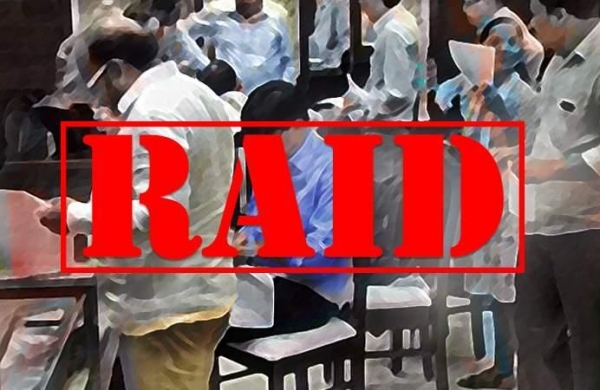 Multiple teams of the I-T department from Delhi and Mumbai conducted the searches under Section 132 of the Income Tax Act at business premises owned by the two media groups in Madhya Pradesh, Gujarat, Rajasthan, Maharashtra, Chhattisgarh and UP, following specific inputs about tax evasion by these firms.

The Bhaskar group, which runs around 65 daily newspaper editions in Hindi, Marathi and Gujarati, had run a series of stories on the alleged cover-up of casualties in MP, Gujarat and UP as well as the vaccine wastage in Rajasthan. After the authorities denied reports of mass graves on the banks of Ganga, it sent an army of reporters to document the same.

The raids drew sharp criticism from Opposition leaders as both the media groups had done numerous stories and programmes highlighting the failure of authorities in managing the pandemic. “The attack on journalists and media houses is yet another BRUTAL attempt to stifle democracy,” tweeted West Bengal CM Mamata Banerjee.

“Their message is clear that whoever will speak against the BJP government… will not be spared,” said Delhi Chief Minister Kejriwal, adding that the searches are an “attempt to scare the media”. However, government sources said the group evaded huge amounts of tax by claiming bogus expenses and purchases using shell entities.

The media group said that it was “independent” and the readers’ will was supreme for it.

“I am independent because I am Bhaskar. Only readers’ will prevails at Bhaskar,” a message in Hindi on the group’s digital news website under the headline “Swatantra Bhaskar” said.

It claimed that the IT department teams also raided the houses of its employees, seized their mobile phones and did not allow them to leave.

ALSO READ | Looked at only financial transactions of Dainik Bhaskar group, not editorial content: IT department

Even night-shift staff were not allowed to leave the offices, it said.

Income Tax officials said it was part of the procedure, and the staff were allowed to leave after legal formalities, it said.

The group’s digital media team was allowed to go home at 12.30 pm on Thursday, it added.

The group’s digital news site had put out reports, along with pictures, on dead bodies of suspected coronavirus patients floating down the river Ganga in Uttar Pradesh and Bihar which had led to nationwide consternation.

As the Income Tax raids unfolded, Dainik Bhaskar also ran a readers survey on social media, asking “Are you with the fearless journalism of Dainik Bhaskar? Answer 1 Yes, 2 No.”

Attempts to contact Parneet Sachdev, Director General of IT, Bihar and Jharkhand who has additional charge of MP and Chhattisgarh for comment failed.

Meanwhile, Madhya Pradesh Congress chief Kamal Nath said the tax raids on Dainik Bhaskar and Bharat Samachar media groups on charges of tax evasion were an attempt by the Union government to suppress the “fourth pillar of democracy” and prevent truth from coming out.

Senior Congress leader Digvijaya Singh said on Twitter that tax officials “are present” at half a dozen premises of the group, including at its office at Press Complex in state capital Bhopal where it is headquartered.

State CPM secretary Jaswinder Singh said the raids were not only an attack on the freedom of expression but a clear sign of a situation worse than the Emergency.

The action came at a time when the government was in a tight spot in Parliament over the Pegasus snooping case and coronavirus deaths, he said.

It also proved that the Narendra Modi government was trying to stifle the voice of democracy, the CPM leader said.

Flaying the government, the Uttar Pradesh Congress in a tweet said, “Kamal’ wale, kalam se darte hain (People with lotus are afraid of the pen)”.

The Congress termed the raids on both the media houses as an “attack on democracy”.

The Samajwadi Party (SP) on its Twitter handle said when a “coward” government is “afraid”, it uses central agencies like the Enforcement Directorate, IT Department and the Central Bureau of Investigation (CBI) against those opposing it.

“With the ink of truth, the government’s corruption, mismanagement during the Covid pandemic, false claims and hollow announcements were exposed by Dainik Bhaskar. Countrywide raids on it are condemnable,” the party tweeted.

Later, SP supremo Akhilesh Yadav in a tweet said, “It is clear from the raids on the media in UP that the BJP is affected by the possibility of its defeat in the 2022 elections. It shows the desperation of the losing BJP. This has proved that the truth that under the oppressive rule of the anti-people BJP those who shoe truth will which be crushed.”

Bahujan Samaj Party (BSP) supremo Mayawati in her tweet said, “Income Tax raids on Dainik Bhaskar Media Group and Bharat News Channel prima facie appeared to be an act of vindictiveness. It brings back the dark memories of the Congress Emergency of 1975. It is very sad and highly condemnable.”

SP spokesperson Ashutosh Verma too said the raids were the result of the BJP’s “fear”.

“It showed that the BJP is so afraid of its defeat in the 2022 state elections that it is targeting media houses for exposing its failure,” Verma said.

“Institutions like the IT Department, CBI and the ED have been made a tool by the BJP to create fear among those opposing it,” he said.

The leader further said his party’s fight is against politicisation of these institutions.

Rajasthan Chief Minister Ashok Gehlot on Thursday slammed the Income Tax raids at the offices of media houses, terming them as an attempt to suppress their voice.

Civil rights group PUCL also condemned the raids on media house, saying it was an attempt to “threaten” and suppress media.

“Income Tax raids on the offices of Dainik Bhaskar newspaper and Bharat Samachar news channel is an attempt to suppress the media.

The Modi government cannot tolerate even the slightest criticism.

This is the fascist mentality of the BJP, which does not like to see the mirror of truth in democracy,” he tweeted.

The chief minister charged that by taking such action, the Modi government wants to send a message to media houses that if they are not in their favour then their voices will be crushed.

She alleged that the raids are a “clear message” from the central government and it is a “malicious attempt” to teach a lesson to journalists and editors and to “suppress and intimidate” all other print and electronic media.

Meanwhile, Union minister Anurag Thakur said the agencies are doing their work and there is no interference in it.

He also asserted that “one should take complete information and in its absence sometimes many issues come up that are far from the truth.”

The Information and Broadcasting Minister was responding to a question on the opposition Congress’ charge that the raids were intended to throttle the voice of democracy.

“Agencies are doing their own work and there is no interference. One should take complete information and in its absence sometimes many issues come up that are far from the truth,” he told reporters at a cabinet briefing.

There was no official word from the Income Tax Department or its policy-making body, the Central Board of Direct Taxes (CBDT), on the raids.

These raids triggered a widespread criticism, including from the opposition parties with Congress chief spokesperson Randeep Surjewala earlier accusing the government of attacking the freedom of the press and throttling the voice of democracy through these raids.

You cannot suppress the voice of democracy with “Raid Raj”,” he tweeted in Hindi using the hashtag “#RaidOnFreePress”.

“How much more will you strangle the media? How much more pressure will the media accept? How long will the powers-that-be fetter the truth,” he also said in another tweet, questioning why the TV is still not debating the issue.

“No pressures. Now the flood of truth will come,” Surjewala said.