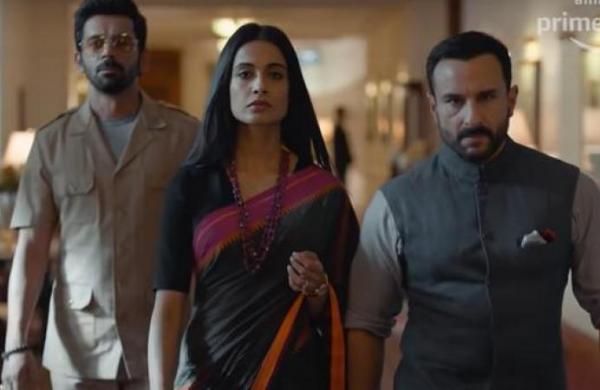 Express News Service
LUCKNOW: Amazon Prime national head Aparna Purohit appeared before the Special Investigation Team (SIT) for the second time late on Monday evening to record her statement in connection with the FIRs lodged against her and others related to the controversy over the ‘Tandav’ web series.

She has been asked to appear before the investigation team again on March 18.

Earlier, Purohit had appeared before the SIT on February 24. As per the highly placed sources, Purohit was asked about 50 questions and directed to come prepared with their answers during her next visit to record her statement.

The political drama series featuring Saif Ali Khan, Dimple Kapadia, Tigmanshu Dhulia, and Mohammad Zeeshan Ayyub, has been hitting the headlines since its premier owing to its content.

Two FIRs — one at Hazaratganj police station in Lucknow and the other at Rabubpura police Station in Grater Noida — were lodged against Ali Abbas Jafar and Gaurav Solanki, the director, and writer of the web series ‘Tandav’ respectively, for allegedly depicting Hindu deities in a bad light. The case, registered by SI Amarnath Yadav at Hazaratganj police station on January 18, had also named Aparna Purohit, producer Himanshu Krishna Mehra, and other unnamed persons.

While the FIR lodged on the complaint of one Balbir Azad of Raunija village in Greater Noida on January 19, 2021, had alleged that the series also depicted Uttar Pradesh and its police in a bad light.

The SC bench, comprising Justices Ashok Bhushan and R Subhash Reddy, had observed that the protection from arrest will be subjected to the petitioner cooperating with the investigation and appearing before the police as and when summoned.

Aparna Purohit had filed a petition challenging the refusal of pre-arrest bail by the Allahabad High Court on February 25.

Earlier, while rejecting the anticipatory bail of Purohit, the single judge bench of Justice Siddhartha had come down heavily on the makers of the web series and observed that not only the sentiments of the majority community were hurt by the display of the characters of their faith in a disrespectful manner in the web series but an attempt was also made to widen the chasm between the higher castes and the scheduled castes when the objective of the state is to bridge the gap between the different castes and communities and make the country a united force socially, communally and politically.

Amazon Prime Video recently had issued an unconditional apology yet again on the issue. Their statement read: “Amazon Prime Video again deeply regrets that viewers considered certain scenes to be objectionable in the recently launched fictional series Tandav. This was never our intention, and the scenes that were objected to were removed or edited when they were brought to our attention. We respect our viewers’ diverse beliefs and apologize unconditionally to anyone who felt hurt by these scenes.”

“Our teams follow company content evaluation processes, which we acknowledge, need to be constantly updated to better serve our audiences. We will continue to develop entertaining content with partners while complying with the laws of India and respecting the diversity of culture and beliefs of our audiences.”