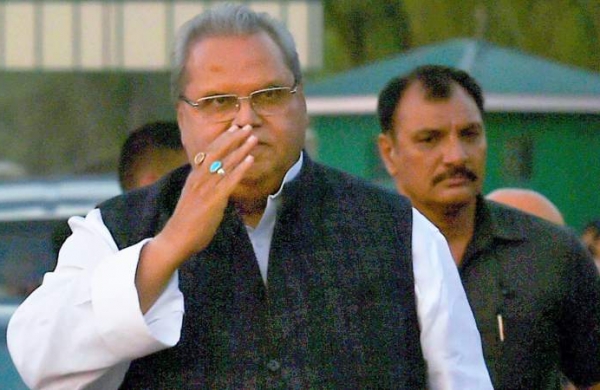 By PTI
NEW DELHI: Meghalaya Governor Satya Pal Malik has said he was talking “unofficially” to the agitating farmers and the government to press for an early solution to the stalemate over the contentious agri laws, adding there was a growing understanding within the two sides that a resolution needs to be found at the earliest.

He also expressed regret that “no one has uttered even a single word” at the death of agitating farmers during the over 100-day protest by them.

Referring to the deadlock persisting between the protesting farmers and the government despite several rounds of talk Malik said no one is being unreasonable in the government and only those who want to damage the party are opposing an early solution.

“I am of the opinion that there should be a solution to the problem at the earliest and I am hopeful now of an early solution because there seems to be not much distance between the viewpoints of two sides.

“I am talking unofficially to both the sides pressing for an early solution.

There is a growing understanding within the farmer community that a solution needs to be found at the earliest as well as the government,” Malik told NDTV.

Hundreds of farmers have been camping at Ghazipur, Singhu and Tikri on Delhi borders since November with a demand the Centre repeal the three contentious farm laws and make a new one that would ensure a legal guarantee on the MSP.

Protest is also going on in several parts of country on the issue.

The government, however, has held that the laws were pro-farmer.

“No one is unreasonable in the government — neither the Prime Minister (Narendra Modi) nor other people.

Only those people will oppose an early solution to the problem, who want to damage the party.

I am hopeful of an early solution to this, as otherwise the issue will damage the party in Western UP, Haryana and Rajasthan,” he added.

“I have been asked by the media why I am talking about the issues despite being on a Constitutional post, and I explained that even if a dog is killed, there are condolence messages pouring in from everywhere and here 250 farmers are dead the border, no one has uttered even a single word,” he added.

“By not talking about it, we have left the entire turf for opponents who are talking and taking political mileage from it,” he said.

Malik said he was born and brought up among the farming community and that is why he was pained about the situation.

He said he is not worried as to what his former party members in the BJP will think of him for his statements on the issue.

“I was born and brought up with this community and that is why I am pained about the situation of farmers today.

No, I am not scared because whenever leaders of my party feel that I am creating problems for them and the same is conveyed to me, I will immediately leave and raise the same voice as an individual,” he said.

The government has held several rounds of talks with farmer leaders, but they have been inconclusive so far.

Earlier, siding with farmers, Malik had on Sunday urged Prime Minister Modi and Home Minister Amit Shah not to “offend” them.

Speaking at an event in his home district Baghpat, he had said if the Centre gives legal guarantee of the minimum support price (MSP) for crops, farmers will relent.