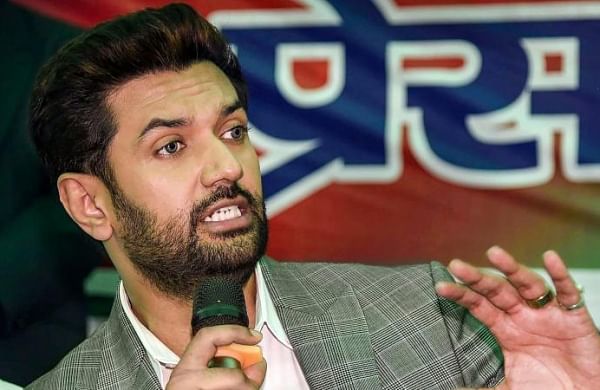 By PTI
PATNA: Lok Janshakti Party leader Chirag Paswan on Monday fired a fresh salvo at Bihar Chief Minister Nitish Kumar, his political bete noire, whom he charged with harbouring the “ambition” to “snatch” away the top post in the country from Prime Minister Narendra Modi.

Paswan, who has been cornered within his own party following a recent split, sought to warn the BJP of the JD(U) de facto leader’s alleged plan through a flurry of tweets in Hindi.

“A fresh surge in the ambition of PM material is apparent. If an alliance partner of the Prime Minister expresses such an ambition, it becomes obvious he is aiming to snatch away the post from the incumbent,” he tweeted, avoiding mentioning Kumar by name.

His remarks came in the backdrop of an averment by Upendra Kushwaha, the JD(U)’s parliamentary board chairman, that the Bihar CM was a “Prime Minister” material.

Kumar, who was once seen as a “secular” alternative to Modi, has distanced himself from Kushwaha’s remarks, saying he had no such aspirations and his only wish was to “keep serving Bihar as long as possible”.

Chirag, who succeeded the late Ram Vilas Paswan as the LJP national president only to be sidelined upon his father’s death, said in another sarcastic tweet, “Our PM comes up with Mann Ki Baat. Another Mann Ki Baat has come from PM material though the latter is driven by self-interests”.

Seeking to twist the knife, Chirag, whose decision to pull out of the NDA cost the JD(U) dearly in the assembly polls, added, “The PM material is busy striking at the roots of the BJP on the mercy of which he is enjoying his tenure as Chief Minister”.

Kumar is serving his fourth term in office though his party had finished with a tally less than 45, far lower than that of the BJP, which bagged more than 70 seats.

The Jamui MP insisted that by having adopted a stance at variance with the BJP on various issues, Kumar was working on his “gupt yojana” (secret plan).

“The PM material is working on his secret plan against the BJP with the power he has come to enjoy owing to the party’s support. By striking notes of discord on caste census, population control and CAA-NRC, the PM material has embarked on the journey to realise his ambitions. Beware!” tweeted Chirag.

He has been professing his loyalty to the saffron party and Modi, but left licking his wounds in the wake of the faction led by Paras getting recognition and his rebellious uncle’s induction into the Union cabinet.